No laughing at Trump’s shot

No laughing at Trump’s shot 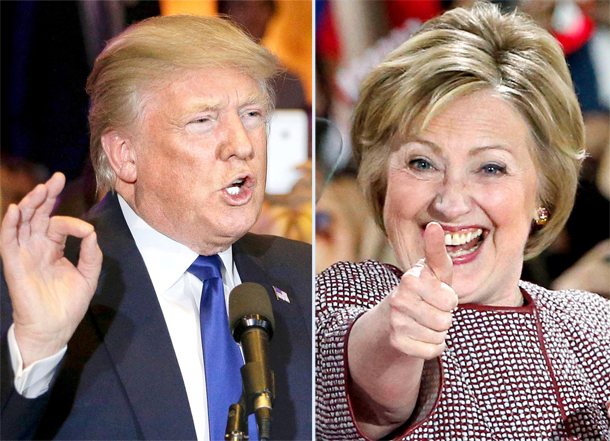 Hillary Clinton will surely have a landslide victory over Donald Trump in the upcoming U.S. presidential election, according to a poll that the Washington Post and Survey Monkey jointly conducted and announced this month.

When the poll result for each of the 50 states is converted into electoral votes, Clinton would get 244 while Trump only would earn 126. Two hundred forty-four is a significant number. In the U.S. presidential election, a candidate who gets more than 270 electoral votes would win, and Hillary Clinton is almost there. How can Trump more than double the number of votes?

Can Clinton be sure of victory? It’s not so certain. The poll was conducted from Aug. 9 to Sept. 1, and Clinton’s high rating has been rapidly falling as Trump is catching up. Clinton’s rating soared after the Democratic National Convention ended on July 28. According to the Real Clear Politics’ analysis on major poll results, on Aug. 9, the day Washington Post started its poll, Clinton led Trump by 7.9 percent. But when the poll ended on Sept. 1, the difference was cut to 4.9 percent. As the poll reflects the climax of Clinton’s rating, it is too early to be confident of a victory.

By contrast, a joint poll conducted by the Los Angeles Times and the University of Southern California and announced on Sept. 18 showed Donald Trump leading Clinton by 6.7 percent. This is a remarkable reversal for Trump. But the survey was conducted on a panel of 3,000. Every day, some 400 people are surveyed to track changes in opinions. Panel surveys are supposed to be taken over time and are useful to see how trends changes, not as a definitive measure of difference.

How about in the battleground states? In Ohio, a CBS News and YouGov survey announced on Sept. 11 showed Clinton with a 7 percent lead over Trump in the four-way contest including minor candidates. But a CNN-ORC survey three days later showed Trump leading by 4 percent.

As the U.S. presidential election campaign is a series of reversals within the margin of error, the number seems to be meaningless now. Of course, the opinion polls after important turning points such as a television debate would be significant. But if the difference remains a few percentage points until the election date, predicting the outcome seems nearly impossible.

Personally, I think the U.S. presidential election has been in an unpredictable state since early September. While Hillary Clinton has full support from the Democratic Party and the White House and extensive organizations across the country, Donald Trump has loyal followers.

It is a battle of who can bring more supporters to come to the polls and cast votes. In short, the days are long gone when we can laugh off Trump’s shot at the presidency.