A spooky and peculiar child’s tale: Tim Burton returns with a film that magically mixes fantasy and reality

A spooky and peculiar child’s tale: Tim Burton returns with a film that magically mixes fantasy and reality 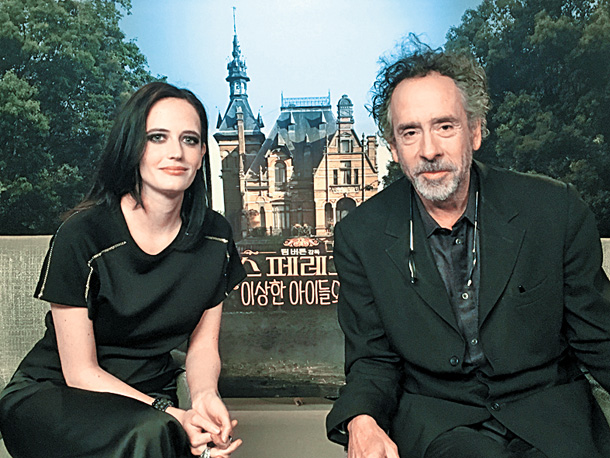 Director Tim Burton has long been fascinating audiences - from children to adults - with his fairytale-like movies. The 58-year-old’s “Edward Scissorhands” (1990) and “Big Fish” (2004) made people laugh and cry while being left in awe by the beauty of each film. Another visually magnificent Burton film, “Miss Peregrine’s Home For Peculiar Children,” opens in theaters on Wednesday.

Based on Ransom Rigg’s 2011 New York Times best-selling novel with the same name, the upcoming flick centers on Jake (Asa Butterfield) and Miss Peregrine, (Eva Green) who protects peculiar children with special abilities from evil forces in the 1940s.

“[The movie] is a beautiful, modern fairytale with unusual characters,” said Green during a video conference from London last week at the CGV theater in Yeouido, western Seoul, that she attended alongside the filmmaker.

“Miss Peregrine is a mother figure that is ready to do anything for their children, which is very beautiful,” explained Green, who added that she is highly flattered to be a part of one of Burton’s films.

Green went on to explain that Miss Peregrine in the movie “looks different” (from the book’s character, who wears a Victorian dress with glasses) and is “bit more rock and roll.”

Burton, who sat beside Green during the conference, stressed that “the film is for everybody.”

Below are edited excerpts of the video interview with Tim Burton.

Q. How do you want this film to be introduced to Korean viewers?

A. I only make films hoping that anybody responds to them. Mixing fantasy and reality is something that I like to do, and I just hope that people enjoy this movie for what it is.

In the novel, the time loop and the backdrop of World War II are a little complicated, but the movie seems to have changed that complication into a more simplified version. How did you pull that off?

I’m really bad with time. I never know what day or what time it is. I tried to create something poetic and emotional. And the idea of being stuck in one day seemed poetic, beautiful and slightly sad at the same time. Since I’m not a technical person, I try to do things in a simpler and emotional level.

There are some scenes in the movie that even some grown-ups may feel uncomfortable watching. Have you ever felt that your movie style is too scary for children?

I grew up watching monster movies. If you read old fairytales such as “Little Red Riding Hood,” there have always been some spooky parts, and a lot of kids I know love those kinds of things. Think about the idea of weird bedtime story. Spooky stories have been around before movies were invented. I don’t think anything I’ve done is too weird for children.

You have helmed several movies that are based on novels. How was working on “Miss Peregrine’s Home for Peculiar Children?”

[Putting novels on screen] is an interesting challenge. Everybody who knows a book puts [his or her] interpretation of how to perceive it. So it’s a challenge. But we’re very lucky with [“Miss Peregrine’s Home for Peculiar Children”] because we have a writer still alive who was also very collaborative. We made some changes in the film, but he understood the fact that it was a different medium from the book.

What is most important to you when helming a film, and where do you get inspirations from?

[Inspirations] come from all different things. There is no one inspiration. Movies are like a weird dream coming true. I believe imagery is the most important thing you remember from a movie. [For me], I sometimes forget about the plot [of a film] but just remember some powerful images just like when you can’t remember the plot of the dream yet still recall few strong images. Powerful images are very important.