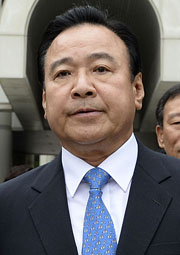 A former prime minister of the Park Geun-hye administration was acquitted Tuesday in an appeal for his bribery conviction, as a high court ruled as inadmissible a key testimony given by a tycoon before his suicide.

The Seoul High Court ruled Tuesday that the prosecution failed to prove the charges against Lee Wan-koo beyond a reasonable doubt and acquitted the political heavyweight.

Lee was prosecuted in July of last year on charges of receiving money from Sung Wan-jong, a construction tycoon-turned-politician who committed suicide on April 9, 2015.

Although he denied the accusation that he had received 30 million won ($27,312) from Sung before the April by-election in 2013, the Seoul Central District Court convicted him in January, based on a media interview Sung had given before his death.

The former prime minister was ordered to serve eight months of a suspended prison term and pay 30 million won in fines.

At the time, the court said Sung could not testify because he had died, but that his phone interview with local media was admissible as evidence based on the criminal procedure law.

The decision, however, was overturned by the Seoul High Court on Tuesday. “It is hard to say that Sung’s account of Lee during his interview was made in a particularly reliable state,” the court said. “It is, therefore, not admissible as evidence.”

According to Article 314 of the Criminal Procedure Act, “If a person who is required to make a statement in a preparatory hearing or trial is unable to make such a statement because he is dead, ill or resides abroad, his whereabouts are not known, or there is any other similar cause, the relevant protocol and other documents are admissible as evidence: Provided that it is admissible only when it is proved that the statement or preparation was made in a particularly reliable state.”

The appeals court said Sung, former chairman of Keangnam Enterprises, was under investigation by the prosecution over his illegal lobbying activities, and he could have given a false statement against Lee during the media interview. “At the time,” the court said, “Sung believed that Lee was behind the probe against him and expressed strong rage toward the accused.”

The court also questioned the validity of the charge against Lee in the memo found in Sung’s pocket after he committed suicide. Sung was found with a small piece of paper that listed the names of eight politicians next to what appeared to be the amount of illegal political funds he had paid to some of them.

While Sung wrote down numbers next to the names of the politicians, no figure was written next to Lee’s name. “Sung expressed strong hatred toward Lee at the time, and if he remembered the amount, there would have been no reason for him to leave it empty,” the court said.

Lee welcomed the acquittal. “From now on,” he said, “the prosecution must refrain from exercising its prosecutorial right unreasonably and recklessly.”

After a series of botched nominations for the prime minister post, President Park named Lee, a politician who built his career in the Chungcheong region by climbing his way up from police chief of a small village in Hongseong, to prime minister in February last year.

The former South Chungcheong governor, who also served three terms in the legislature, only served the post for 70 days, becoming the country’s shortest-serving prime minister after he stepped down due to the payoff scandal.

The prosecution is expected to appeal, and the case will likely go to the Supreme Court for a final ruling.