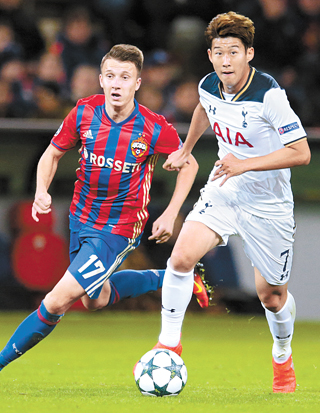 Son Heung-min of Tottenham Hotspur dribbles past CSKA Moscow’s Aleksandr Golovin on Tuesday in a UEFA Champions League match. Son netted the game winner in the 70th minute, his fifth this season for Spurs. [AP/NEWSIS]

English Premier League (EPL) club Tottenham Hotspur clinched three points in this year’s UEFA Champions League during their trip to Russia by taking down CSKA Moscow 1-0 on Tuesday. It all came from Korean playmaker Son Heung-min’s foot when he broke the deadlock by netting the game winner, continuing his dominating form as he slotted his fifth goal in as many appearances this year for his English club.

After the 2-1 loss against AS Monaco during the opening round of the UEFA Champions League group stage, Mauricio Pochettino and Spurs went to Russia without some of their key players, including Harry Kane, who’s on the mend after suffering an ankle injury. Nerves of steel and determination are what Spurs needed as they took on Moscow in front of their home crowd in Arena CSKA, and they delivered. Knowing Son may still have something left in his tank, Pochettino started him again, after Son had just come out of tallying two goals against Middlesbrough over the weekend in an EPL match. Unsurprisingly then, the Tottenham manager made a solid call.

Playing on the left flank in the first half, Son and Spurs did not have much to show for and the match was deadlocked throughout with vain attempts to get a point on the scoreboard.

Son gained more opportunities to strike in the second half after moving to the right side and on a foray in the 70-minute mark, Son finally broke through the off-side trap and, upon receiving a through-pass by Erik Lamela, Son squeezed the ball past Moscow’s keeper Igor Akinfeev. This was Son’s fifth goal this season in just five outings, matching his report card from the 2015-16 campaign, his first season with Tottenham. The goal also marks the sixth UEFA Champions League goal in his career, surpassing the record set by now retired Manchester United midfielder Park Ji-sung. Park scored five Champions League goals throughout his career, two with PSV Eindhoven of the Netherlands and three with United. 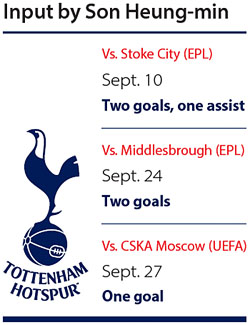 Son’s goal against Moscow now makes him the leading scorer in the Champions League among Korean players in Europe. He netted five while with his former Bundesliga club Bayern Leverkusen.

“I think it’s key,” Pochettino said of Son, according to Sky Sports, a leading subscription-based sports broadcaster in Britain. “It’s very important that not only Harry, who was good before his injury and scored, but now another player has scored. I feel very pleased for Sonny [Son’s nickname]. He is on fire and to keep this form is very important for us.”

“The team made me score and [I am] happy to get an extra point,” Son said. “We are one team and the team is on fire. Everyday, every game, I want to be focused to play. I want to be happy. Everyone was tired after Saturday’s game but I am thankful for my teammates.”

Essentially, the season is unfolding well from the get-go for Son, who was mired in a possible transfer rumor early in the season. Earlier this month, it was reported that Tottenham considered selling Son to Bundesliga’s Wolfsburg after his poor season last year. But the bargain was dashed and now after just five outings, it is starting to look like Son remaining at the North London club was a good move, for Son as well as for Spurs.

Son’s hot form bodes well for the Korean team as well, which will be hosting Qatar next Thursday and traveling to Tehran on Oct. 11 for the third and fourth matches of the final qualifiers for the 2018 World Cup.