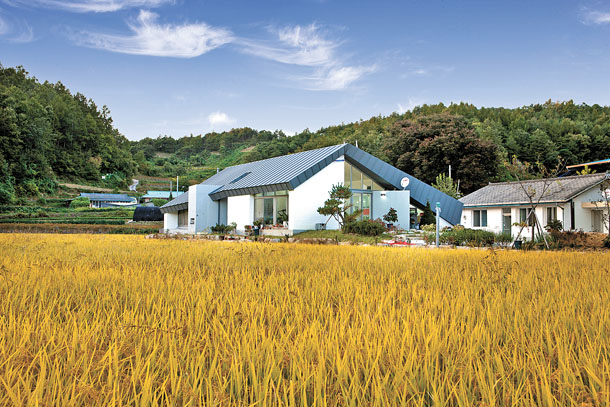 Yeongju in North Gyeongsang is gradually transforming. Collaborating with architects, Yeongju has been designing, constructing and upgrading public buildings for 10 years. Above is the Public Health Center designed by architect Yun Seung-hyun located in Munsu-myeon. [KIM JAE-YOON]

YEONGJU, North Gyeongsang - A modern looking building that’s been the talk of the town recently opened its doors to villagers after months of construction in the small Pungi county of Yeongju in North Gyeongsang. This trendy building, that could easily be mistaken as an art gallery, is in fact Pungi’s new county office. Unlike the usual box-shaped public office buildings that are boringly normal, the new Pungi County Office has been designed with a vision that “urban regeneration begins from well-established centrality,” says Choi Jae-won of architecture firm Design Oz, who designed the building. In this case, Choi says this trendy public building where people can gather together to engage in discussion, take a brief break from the sun and be a community acts as the center where ideas of urban regeneration can come from.

When this reporter visited the new building to take a look, Chang Ki-jin, the town mayor of Pungi County proudly showed her around.

“It doesn’t look anything like a public office, does it?” asked Chang. “When a public building is designed in such a way, it brings a lot of big and small changes to the neighborhood. We are thinking about holding small outdoor music concerts on the rooftop of the second floor.”

Architect Choi explained that he wanted to break the established image of a boring box-shaped public office building and build a trendy gallery-like space that can act as a “crossing where residents in the area enjoy stopping by without feeling any burden.”

In fact, it’s not only this County Office Building that’s winning prizes. There are about 20 public buildings in Yeongju that have won various architecture awards. These award-winning buildings are not that grand in size. Most of them are small public buildings for the villagers such as a public health center, a county office, among others. They are not large and flashy, but are being hailed by the users as “simple and well-designed.”

Inside a silver hall in Yeongju’s Gahong-dong, a group of senior citizens sit comfortably on teonmaru (a narrow wooden porch running along the outside of a room) having a friendly chat. They said that this building was designed by a young architect who solely thought about the needs of the senior citizens.

With such positive outcomes, residents in the area expressed satisfaction saying that “it’s been a long time since the government actually showed interest in the way we live,” while architects in Seoul began paying attention to what’s going on in Yeongju because it is now taking all of the top awards.

The transformation of Yeongju began in 2007. The trigger was an official letter that was addressed to 10 rural cities with populations of less than 100,000 from the Architecture & Urban Research Institute (AURI), the country’s very first national research development institute for architecture and urban space. It stated that “the institute will establish an integrated masterplan for urban regeneration at no cost.” At the time, small rural cities were having headaches following the rapid development of new urban centers. For them, establishing new urban centers by constructing new high rise apartments meant that the old urban centers would deteriorate. This issue was a “major toothache” shared by most rural cities, which were witnessing a major exodus each year. However, nobody willingly stepped forward and accepted the proposal from the AURI. That was because the offer was available under the condition that they “actively disclose any information necessary and participate.”

Yeongju finally raised its hand and accepted the offer.

There are about 110,000 people living in Yeongju. Over the course of three years, in-depth research on the city’s architecture was carried out. Ahn confessed that he didn’t know before this project that “such a detailed framework like researching the city space and coming up with a theme, needed to be established before jumping into developing a city.” After the major framework was set up, it was time to put it into action.

In 2010, the city established a new department directly under the mayor titled “Design Management.” Cho Jun-bae, who initially began the research of Yeongju City’s masterplan took charge and recruited three architects, including Yun Seung-hyun, who were based in Seoul and appointed them as the first Public Architects of Yeongju.

“At that time, Director Cho leaving his job at AURI and going to Yeongju, hired as a contract worker by Yeongju City, was such a hot topic of conversation,” said Yun. Since this project, Yeongju has continued operating the city’s Public Architect System with a belief that “changes can take place from well-designed public buildings.”

“It was the first time that a small building in the countryside that’s less than 100 pyeong (330 square meters) was awarded by the Korean Architecture Awards,” said Yun, adding that they spent no more than the amount that is required to construct the usual public health center. “I wanted to prove that the outcome can be tremendously different with design under equal terms.”

This cafe-like public health center was welcomed and enjoyed by everyone in the area.

Kim Sun-ae, head of the Health Center was delighted with the new building.

“I’ve volunteered to come to the countryside and work for the people for 29 years,” said Kim. “This new trendy building even has a residence so I feel like my youth has been compensated. Elderly citizens in the area also say they really love the building and that they are benefiting culturally.”

What the elderly in Yeongju City enjoy most is the new Hanjeolma Silver Hall in Gaheung-dong. This new building, which was constructed recently, was also designed to better accommodate the elderly who use the hall. For example, considering the fact that Korean elderly like to sit down on the floor against the wall, Cho Jae-won of 01 Studio installed a wooden porch right outside each room.

“Noticing that women like to gather together in separate rooms than the men, I also decided to install a sliding door that can divide the big hall in two,” said Cho. “When there are large gatherings, these sliding doors can fully open up.”

Yeongju began constructing larger buildings as well. In the center of the city, there’s a vast triangular shaped plot of land which will soon be a multi purpose community center that will house a Senior Welfare Service Center, a Rehabilitation Center for the Disabled and a gym for the residents. Inside the gym will be an indoor pool and a boxing studio.

For this grand project, Yeongju raised funds for the budget by entering into a number of city architecture competitions organized by the central government and North Gyeongsang Province. Since 2008, it has managed to scrape together about 44.9 billion won ($40.89 million). By adding 25.3 billion won more from its own budget, this grand plan went under way.

“During the planning, we accumulated detailed data and organized it well, diagnosing the present condition and elaborately planning the next step,” said Cho, who worked on the master plan. “That’s how we were able to achieve good results in so many competitions.”

According to Yeongju, it was also important for them to bring architects from Seoul and make all the procedures transparent. It was to prove that they were not carrying out unnecessary construction and wasting tax payers’ money.

“Unlike western countries, Korea doesn’t really disclose judging processes or procedures in open contests,” said Kim Soo-young of Su:mvie Architecture, who won the Kim Swoo Geun Architecture Prize this year for designing the indoor swimming pool for the new community center. “But for this project, Yeongju City disclosed all the procedures so I could submit my design with confidence that they are doing this fairly and transparently.”

In 2012, Yeongju enacted an ordinance on landscape and design so that the city can maintain the design management team in the city. According to the ordinance, the Yeongju Mayor has to oversee a team composed of design experts for the city.

“If city policies changed every time a mayor changes, Yeongju wouldn’t have been able to establish such design-friendly public buildings and maintain them today,” said Cho.

Left to right: Pungi County Office in Yeongju, designed by Choi Jae-won, looks nothing like the dull box-shaped public official buildings that people are familiar with; The trendy Silver Hall, designed by Cho Jae-won, for the elderly in Gaheung-dong; The new Silver Hall is installed with teonmaru (a narrow wooden porch running along the outside of a room) outside each room, after the architect noticed that elderly citizens like to engage in small talk while sitting on a wooden floor and leaning against a wall. [HWANG GYU-BAEK, JIN HYO-SOOK]