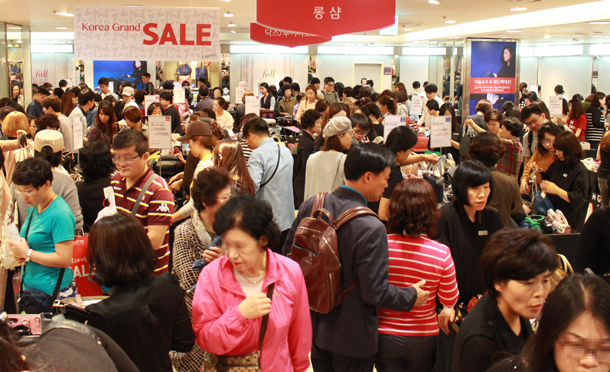 It’s getting bigger and bigger, the Korea Sale FESTA from Sept. 29 to Oct. 31.

Many retailers are participating in the shopping event. Lotte Department Store’s top raffle prize is a 700 million-won ($638,000) apartment unit and 400 million won retirement savings. LG Electronics is offering a limited edition washing machine for 1 million won less than existing models. An automaker has marked down models as much as 3.88 million won. So it seems that an attractive lineup of products is offered. On Sept. 28, discounts on mobile phones, a must-have for all Koreans, were announced. Things have evolved from last year’s Korea Black Friday, which was criticized for having few discounts and unappealing products. Learning from the failure, the government and retailers worked together to make the event more successful this year.

But the basic question remains: Who is this shopping festival targeting? Most of the promotions and sale items are targeting domestic consumers.

Among countless hotels in Korea, only 25 of them posted the coupon on their English website, indicating they offer discounts for foreign visitors.

Only five restaurants are participating in the festival.

Most of the preparation was to encourage participation and promote the event to Korean consumers. A travel operator insider who wishes to remain anonymous said, “The sale percentage and participants were finalized at the last minute and there has been little PR abroad, so not many foreign tourists planned their trips to go shopping in Korea during this event.” Another department store employee said, “While the department store uses its own marketing channels to promote the sale to Japan and China, it is regrettable that overseas PR efforts on the festival itself were poor.”

Social media is also very quiet. The Facebook video featuring B2B, Baek Ji-young and Hong Soo-ah is in Korean only, and as of Sept. 28, it has 185 views. The teaser video for the opening concert featuring Vixx and Red Velvet on YouTube has 412 views as of Sept. 28.

Boosting domestic consumption by urging consumers to buy goods they would otherwise buy in another sale promotion hardly seems worthy of the reputation of being the nation’s biggest tourism and shopping festival. Chinese tourists are already buying cosmetics and household goods. It would be deceiving to say foreigners’ purchases increased just because Chinese visitors buy a bit more during the sale.