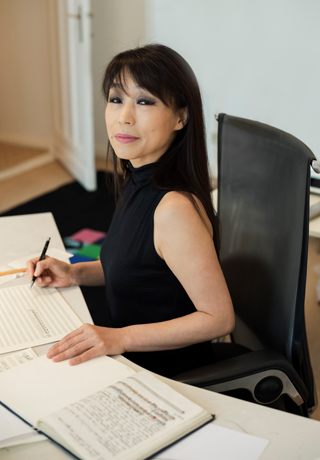 It looks like the Seoul Philharmonic Orchestra (SPO) is slowly getting on its feet after much meandering following the abrupt departure of its former maestro Chung Myung-whun. On Wednesday, the city-run orchestra announced that it has appointed Unsuk Chin, the orchestra’s composer-in-residence, to co-serve as its Artistic Advisor. Michael Fine, who previously served as the orchestra’s artistic advisor, resigned from his post right after Chung’s departure last December. Chin will officially begin as the Artistic Advisor from Oct. 1.

Chin, an internationally renowned composer who has been working with the SPO for the past 10 years, said she had mixed feelings upon receiving the request from the orchestra earlier this year.

“As you are well aware, the orchestra suffered many twists and turns over the past few years and I was very distressed about it,” said Chin. “Then Maestro Chung suddenly left the orchestra late last year while I was in Germany and I had to think about what I should do. Then the orchestra came to me, requesting that I take another position and I couldn’t really say yes right away.”

But Chin said that when she came to Seoul in March to organize this year’s Ars Nova series, the orchestra’s annual contemporary classical music concert presented by the orchestra under her directorship, she saw the orchestra struggling to organize concerts and programs for the upcoming years on their own and that “it felt like that I had to jump in and help.”

Choe Heung-sik, CEO of the orchestra said that right after maestro Chung’s departure, his first business trip was to Germany to see Chin.

“For the past 10 years, Unsuk Chin has been working closely with the orchestra and has organized the Ars Nova series. I have heard high praise from many music critics about this program of our orchestra,” said Choe.

“After maestro Chung and Michael Fine’s departure, the orchestra has been running with vacant posts. We’ve been making efforts to operate without problems while trying to bring in acknowledged artists to lead the orchestra. I think we are finally seeing some fruit,” he added.

Last Friday, SPO adopted a new system of organization for the orchestra and appointed two conductors from overseas as the principal guest conductor and the conductor-in-residence.

Chin, who has won numerous international awards such as the Grawemeyer Award in 2004, the Arnold Schonberg Prize in 2005 and the Music Composition Prize of the Prince Pierre Foundation in 2010, said she feels “heavy on her shoulders to bear one more position at the orchestra” but added that she’ll “try to expand the repertoire of the orchestra to include more diverse kinds of music, not just the ones that Koreans like to listen to like Beethoven and Mozart.” But she reassured audiences “not to be too nervous that I’ll include so many contemporary classical music that many Koreans find difficult to listen to as there will be a good mix.”

Meanwhile, Chin’s regular Ars Nova series No. 3 and 4 will be held next week. For the third Ars Nova concert of this year titled “Pianoscope,” pianist Mei Yi Foo will be performing with the orchestra under the baton of Antony Hermus on Oct. 3 at the Chamber Hall of Sejong Center for the Performing Arts in central Seoul. The fourth, titled “Fantastical Tales” will be held on Oct. 7 at the LG Arts Center. For more information, visit www.seoulphil.or.kr.