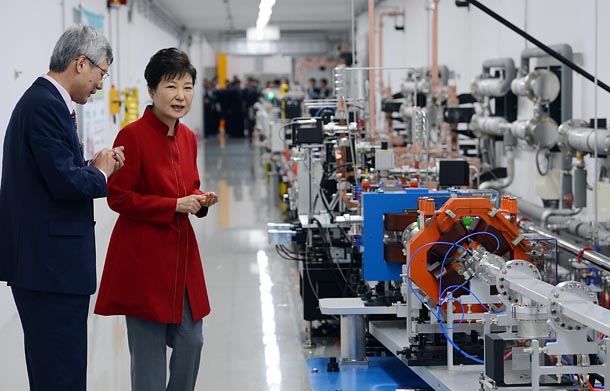 Researchers at Pohang University of Science and Technology have built a fourth-generation synchrotron radiation facility, a type of particle accelerator that emits incredibly bright X-rays.

Korea has become the third country, after the United States and Japan, to design and produce the cutting-edge facility.

Postech as well as the Ministry of Science, ICT and Future Planning celebrated its completion on Thursday at the Pohang Accelerator Laboratory in the North Gyeongsang port city.

The facility, otherwise called the X-ray Free Electron Laser, is capable of emitting X-rays at 0.1-nanometer wavelengths, which are 10 billion times brighter than third-generation facilities.

The light from the new facility, which is 1.1 kilometers (0.7 miles) long, is also 100 quadrillion times brighter than the Sun.

This upgrade makes it possible for researchers to monitor and analyze the microstructures of materials with immense precision in real time - such as a virus protein penetrating a cell membrane, or the moment water decomposes into oxygen and hydrogen.

This will be of particular benefit to researchers in the field of biotechnology, clean energy, nanotechnology and semiconductors, according to the ministry.

“Korea’s science technology has taken one big step towards the future,” said President Park Geun-hye at the ceremony. “The fourth-generation light source facility will serve as a key to unraveling the secrets behind space and life and will provide essential infrastructure for Korea to dominate next-generation industries in advance.”

The ministry spent 429.8 billion won ($390 million) from April 2011 until the end of last year to help Postech develop the machine. The pilot operation of the facility began in April and the facility generated its first high-density laser on June 4.

The market for these facilities tallies 5.4 trillion won, and the successful development of the fourth-generation facility has paved the way for Korea to export the technology.