Innocent fisherman gets caught up in ‘The Net’

Innocent fisherman gets caught up in ‘The Net’ 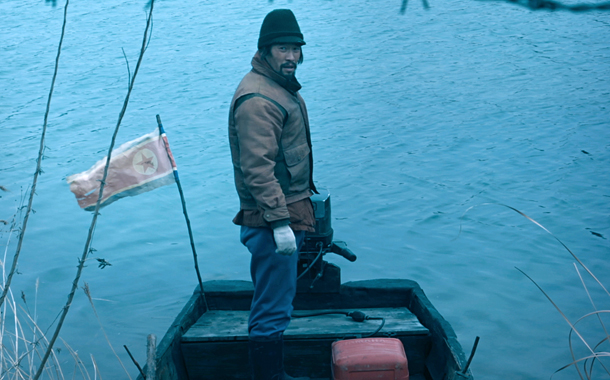 “The Net” draws on a North Korean fisherman (Ryoo Seung-bum), who ironically becomes the fish that gets caught by strongly entwined nets (South and North). [NEW]

Unification has been a sensitive issue for both South and North Koreans since the outbreak of the Korean War in 1950. Although 66 years have passed, relations between the South and North still remains at odds. Especially among young people, enthusiasm towards unification has long faded. In fact, many find themselves shifting the entire responsibility toward the government.

To remind those individuals who have grown numb to the separation and misery of Korea’s division, director Kim Ki-duk has come out with a new film, “The Net.”

“The tension between the South and North has become very extreme,” said the filmmaker at a press screening event on Wednesday. “Through the movie, I hope that we can look back on ourselves and realize how pitiful we [citizens] still are even after decades [since the armed conflict ended without a peace treaty].”

At the heart of the movie is a North Korean fisherman, Nam Chul-woo (Ryoo Seung-bum), in his 30s, who unwillingly defects to South Korea by crossing the borderline of the Imjin River [which bisects the Korean Peninsula and divides South and North on the west coast]. Although he has lived his life catching fish with nets, Nam suddenly becomes the fish caught between two strongly entwined nets - the authorities of the two countries. Upon reaching the South, the military suspects Nam of being a spy and even tries to frame him as such.

Nam undergoes a violent investigation by a team from the South because they believe that “sending Nam back to the despotic state” is morally wrong, and their mission is to “save as many people as possible from [the North’s] dictatorship.”

Nam, however, remains firm in his intention: to go back to the North, where his wife and daughter wait. Wishing for a safe return, Nam forces himself to not see even a glimpse of Seoul by shutting his eyes, as he fears he will “accidentally say something inappropriate when probed by the North’s authorities after his return.”

Although the story does not have many dramatic ups and downs over its 114 minutes, it clearly and painfully portrays the unwilling defector, who, after a miraculous return to the North, is once again unfairly treated by an investigator.

It wasn’t easy for Ryoo to play such an emotional character. “While filming, I tried my best to understand the situations that Nam Chul-woo is going through,” said Ryoo, who couldn’t attend the press preview due to a scheduling conflict, through a press release. “And every scene was heartbreaking,” continued Ryoo. He added that he worked on the movie believing that Nam was real to make his acting more realistic and touching.

The movie does not make any conclusions about which side is worse. The answer is not important for the filmmaker whose core message is “the brutality of ideology,” which may “potentially make anyone a victim.”

“The movie has luckily been rated 15 and over,” Kim said. “I hope that young people who will be leaders in the future will get to think about the division through the film, and one day come up with a solution.”

“The Net” is slated to open in local theaters on Oct. 6.