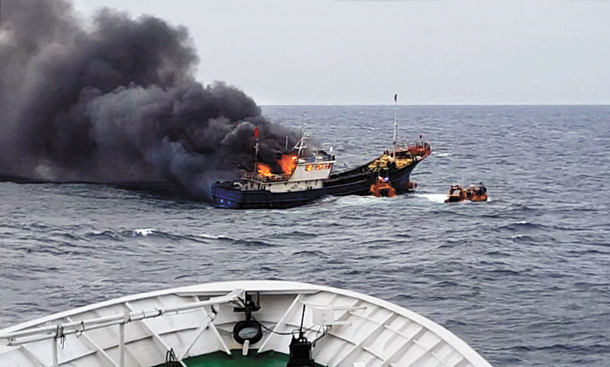 A Chinese fishing vessel on fire west of South Jeolla on Thursday after it was hit with three flash grenades by the Korea Coast Guard for refusing to stop the boat for inspection. [MOKPO COAST GUARD] 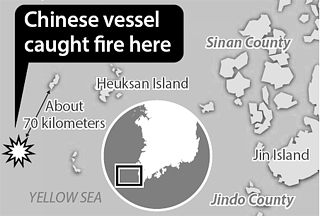 The Coast Guard moved all the Chinese crew onto their vessel and treated the three unconscious with CPR, but they were pronounced dead by a Korean doctor on board around 3:46 p.m. The Coast Guard vessel arrived at Mokpo on Friday. The bodies were transported to a funeral home in the city.

In addition to questioning the rescued fishermen, authorities will request an autopsy of the three dead Chinese fishermen to determine their exact cause of death. They were also to investigate the Chinese vessel once it arrived at Mokpo later on Friday afternoon.

Korean authorities booked the 14 Chinese fishermen for fishing illegally and refusing to obey requests made by the Coast Guard to stop the boat and receive inspections. Authorities may charge them additionally for arson or neglecting a fire hazard if they find evidence of this through their questioning and on-site investigation of the boat.