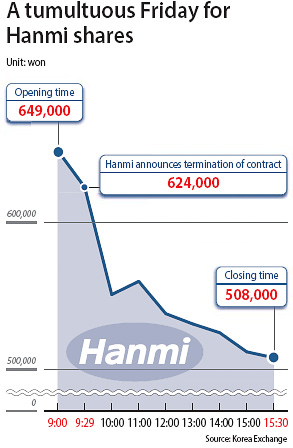 Hanmi Pharmaceutical, the country’s No. 1 drug company by production volume, is facing allegations that it deliberately delayed an announcement on the termination of its contract with Boehringer Ingelheim to buy more time for some investors to withdraw Hanmi shares.

The pharmaceutical company came under tight scrutiny after it announced the end of a partnership with German drug maker Boehringer Ingelheim to develop the lung cancer treatment candidate Olmutinib on Friday, a day after the company unveiled a $910 million contract with Genentech to license a separate anticancer treatment.

The sequence of events left industry observers wondering whether Hanmi scheduled the announcements to favor specific shareholders. The timing would have caused other investors to buy the stock at a higher price after the Genentech announcement, only to see the price plummet again following the Boehringer Ingelheim news.

In particular, a large quantity of offloading and record high amount of short-selling on Friday, especially by institutional investors, bolstered suspicions that a select group of investors may have received earlier notice.

The Financial Supervisory Service launched an investigation over the weekend to see if there were internal underhanded dealings between Hanmi and investors in relation to the allegedly belated notice of the market-moving announcement.

The regulatory agency will zero in on the offloading made right before the contract termination announcement.

Hanmi denied allegations during a rare Sunday press briefing. The drug maker said it first received an email notice from Boehringer Ingelheim at around 7 p.m. on Thursday and put the news up on the electronic disclosure at 9:29 a.m. the next day.

Korea’s Ministry of Food and Drug Safety issued a warning following two cases of toxic epidermal necrolysis during a phase-2 trial of Olmutinib after the German pharmaceutical giant came to its termination decision.

The license agreement with Genentech was reported a day earlier, at around 4:30 p.m. on Thursday.

“We thought the announcement [of a contract termination] might bring confusion if we inform everyone right after a favorable announcement,” said Kim Jae-sik, vice president of Hanmi. “Since the matter is a high-stakes issue, we decide not to leave it to workers on night duty.”

Kim said Hanmi staff went to the Korea Exchange at around 8:30 a.m. on Friday, and it took one hour to complete the announcement procedures after collecting and reviewing related documents. “As we thoroughly reviewed the related content and waited for approval [from the Korea Exchange], we were able to report it at 9:29 a.m.”

“If we step in and handle it, the information can be leaked during that time,” Chae said, “The companies can just put in the content, and it will be uploaded right away.”