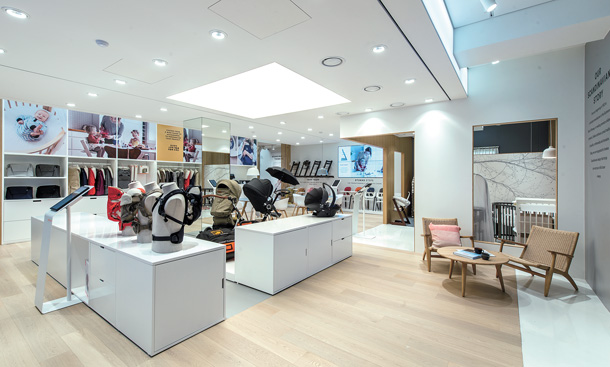 It is dubbed the Mercedes-Benz of baby strollers. It comes with a high price tag — easily over 1 million won ($907) — but its sleek design and user-friendly features have made it one of the most-coveted stroller labels among trend-sensitive young moms in Korea for the past few years.
Stokke, a premium baby product maker from Norway, opened its first Korean flagship store last week in the affluent Sinsa-dong in southern Seoul alongside other high-end fashion houses such as Hermès and Ralph Lauren.

As a comprehensive flagship store that not only sells strollers but also baby furniture and other baby products, the Seoul store is the second of its type after one in Shanghai.

Here, people can also attend classes on infant care and rent Xplory strollers. There is a separate space for moms to breast-feed their children. All in all, this venue delivers an extensive experience of brand value and ideology.

At the press opening of the store held last week, Anton Van De Putte, CEO of Stokke, who joined the company last year, emphasized Korea as a highly “strategic” market for the Scandanavian baby product manufacturer to succeed in other Asian countries. The company believed the many “trend-setting” Korean moms will have considerable influence in other Asian countries. At the event, Stokke unveiled the latest version of its Xplory stroller for the first time, which comes with upgraded wheels. 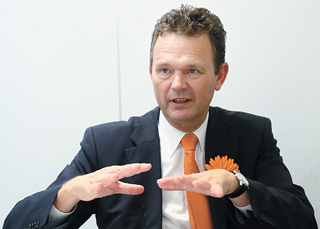 Stokke was founded in Norway in 1932 as a small, family-run, furniture store and started to make a name for itself in the global market with its representative high chair product named Tripp Trapp.

It was in 2003 that Xplory, Stokke’s most popular product in Korea, was invented and was well-received for its height-adjustable strollers that can also have the baby seat rear- or front-faced.

In 2006, Stokke shut down its ordinary furniture business and focused on premium baby products. In 2014, Stokke was acquired by NXMH, a Belgian branch of NXC, a holding company of Korea’s game firm Nexon.

Despite Korea’s fertility rate of 1.2, which is the lowest among OECD countries, Stokke is seeing big potential here, deciding to open its first Korean flagship store after nearly a decade since it first entered Korea and has been enjoying a steady market share ever since.

The European stroller maker believes the low fertility rate can reversely raise demand as it will encourage couples to buy, not many, but select high-quality products for their children.

“We are counting on ‘eight-pocket money,’ where one baby triggers baby product purchases from parents, grandparents, uncles, aunts and more,” said Axl Paik, the country manager of Stokke Korea, who was also at the opening.

To hear more about the brand story and its strategy in solidifying its presence in the competitive baby product industry, the JoongAng Ilbo sat down with Putte after the press opening of the flagship store.

Q. What is the meaning of the Korean market to Stokke?

A. It is included in the top three Asian markets and top 10 global markets. Korean women are trend-setters. So for us, it is very important to succeed in this market.


Stokke was first introduced to Korea in 2006 and has been hugely popular. But why did you decide to open the flagship store now?

I wanted to offer the products when the consumers expected them. This means we had to follow two trends in which one was to offer them at department stores and baby shops. It used to be the sole channels to sell products. Now, the new trend is the flagship and e-commerce platform. Consumers now understand [the brand] better through here.


In Korea, the Xplory, your best-known stroller model, is arguably your most popular product. But in Japan, it is your baby table called Tripp Trapp that is the most popular item. What do you think is the reason behind such differences?

When we first introduced the stroller in Korea in 2006, there was a growing trend of spending more on baby products, so it was a lucky timing.
Yet, we see potential in Tripp Trapp in Korea, as well. If we tell the story right, it will be able to succeed in two to three years. Also, another big difference between strollers and baby tables are that you take the stroller out so that everybody can see it whereas the baby table is more used only at home.


The Stokke stroller was a phenomenon in Korea when it was first introduced. But there are people saying that the bubble has subsided now and its sales started to decline as more similar products are being introduced in the market at a more reasonable price. How do you see this?
The market leader always faces competition to be taken away from its first spot.

However, we see it as a natural thing. [In order to secure the market-leading spot] we make sure that we have newness. The nice thing about baby market is that there are new mothers every day.

You always have the chance to deliver and talk about the brand to new moms, so there are huge possibilities of still moving forward.


You joined the company in July 2015. What is the biggest difference you made to the company since then?

Defining a new strategy was the biggest change made because the company has been focusing on selling it to other companies. Defining what we want to achieve and how we are going to achieve that was important.


So what are the newly-found strategies?

Focusing on innovation and investing more on new products. I want to go through more faster and radical innovation. But the only problem is that it takes time. We want to make sure that there are no issues with the products once they are launched. We feel an obligation to make sure we give the best to the babies.


Was there any change after NXMH acquired the company?

It is a looser relationship, as long as we are going in the right direction. Being owned by a Korean company has motivated us to look at Asia for rapid growth, but we will still investing in other markets, too. We are opening another flagship store in Moscow, Russia, next month.

The only change is that before 2013, Stokke was owned by a Norwegian family, but still they didn’t make decisions. The current owner, NXMH doesn’t get involved in the day-to-day decisions and also they do not tell us what to do.