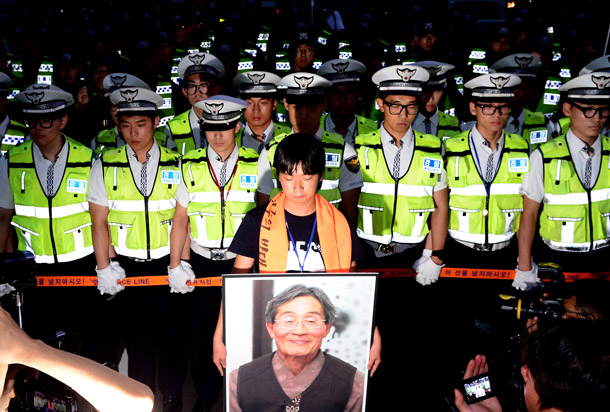 Police stand guard, forming a wall, as more than 7,000 people take part in a memorial rally on Saturday in Jongno District, central Seoul, demanding the government open a special investigation into the death of Baek Nam-gi, an activist farmer who died last week from injuries sustained after he was struck by a riot police water cannon during an antigovernment protest last November.[NEWSIS]

The furor surrounding the cause of death of Baek Nam-gi, an activist farmer who was hospitalized for months after he was struck by a riot police water cannon last November, snowballed over the weekend as family members raised the possibility that the hospital’s death report might have been influenced by local authorities.

During a press conference held Friday at Seoul National University Hospital in Jongno District, central Seoul, where Baek was hospitalized for 317 days until his death on Sept. 25, Baek’s family asked why the hospital had written his death was due to “a physical illness” instead of an external element.

The hospital, one of the largest and most prominent in Korea, said Baek died of cardiac arrest following renal failure, largely ignoring the fact that he suffered a brain hemorrhage after being shot by a water cannon during an antigovernment rally last year.

Seoul National University Hospital has so far adamantly dismissed any possibility that authorities meddled in postmortem procedures. The hospital said it would provide more details during a parliamentary inspection scheduled for Oct. 14.

“We’ve learned in our forensic medicine class that if a patient dies from complications from an external injury, no mater how long it’s been since the patient had come in contact with that injury, the cause of death should be categorized as an ‘unnatural death’ triggered by an external force,” a statement from the students read.

On Saturday, thousands of protesters participated in a memorial rally in downtown Seoul, demanding the government open a special investigation into Baek’s death and not allow an autopsy to be performed, fearing possible meddling in the process.

The Seoul Central District Court last Wednesday approved a police request to conduct an autopsy on the farmer, overturning an earlier decision denying it. The court handed down specific guidelines on how the autopsy should be carried out, saying the process must be thoroughly discussed with Baek’s family and observed by one or two doctors as well as a lawyer appointed by the family.

The court order for an autopsy is valid until Oct. 25, but the police have not decided on when to perform it.

Saturday’s demonstration went on for over an hour after merging with a separate nearby rally marking the 900th day since the April 16, 2014, Sewol ferry incident. There were no arrests or injuries.

Baek was critically injured on Nov. 14 last year when he joined a massive antigovernment protest in Seoul, the largest since 2008. An estimated 64,000 people took to the streets to call for a host of government reforms.