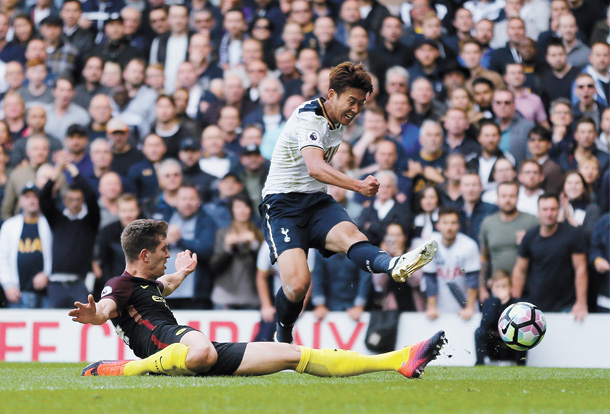 Son Heung-min of Tottenham Hotspur takes a shot during Spurs’ EPL match against Manchester City on Sunday at White Hart Lane stadium in London. Son added an assist to lift Spurs over City 2-0, his second assist in six outings. [AP/NEWSIS]

Son Heung-min of Tottenham Hotspur continues to display superb form as he added an assist while playing center-forward in Harry Kane’s absence, a spot that the Korean attacking midfielder rarely finds himself, whether at club or international level. Son had a passing mark in his first assignment as a lone striker this season, as Spurs defeated Manchester City 2-0 on Sunday in London.

With Kane out due to an injury, Spurs had no notable talent as mobile and agile as the English striker up front. Against City, who have been sweeping wins in and outside of the English Premier League this season, Tottenham manager Mauricio Pochettino needed someone to step up and mark City’s defense from up front. The skipper chose Son, arguably the hottest offensive player for Spurs at the moment, scoring five goals in as many outings. Son grasped the opportunity afforded to him with open arms.

City, led by Argentinian striker Sergio Aguero, had the upperhand going into the Sunday’s match, it seemed. But after the kickoff, Son moved around up front with pace and mobility, against which City’s defenders such as centerback John Stones and fullback Pablo Zabaleta struggled to keep pace.

Son’s dynamic movement threw off City from the opening frame and the first goal for Spurs came amid all of this.

A neat cross coming in from the left side of the field, Son had two defenders nearby, one right on him and the other on his tail. Despite the challenge, Son leaped but missed the header while trying to find his balance midair. Son came down but the midair skirmish between Son and Stones left City fullback Aleksandar Kolarov confused, his sudden attempt to clear the ball ending in an own goal at the eight-minute mark of the game.

Then came Son’s assist about half an hour later. In the 36th minute, Son took possession at the top of the penalty box and saw Dele Alli nearby, squeezing into the small space opened up inside the box. Son delivered a sharp pass to Alli’s feet, who connected it with a nonstop right footer to find the back of the net. In six outings, Son has registered five goals and two assists for Spurs.

Son could have clinched a goal but his well-deserved chance was dashed after his brief argument with his teammate Erik Lamela over who was going to take the spot kick later in the second half. Lamela eventually took it and was rejected at the hands of City’s goalkeeper Claudio Bravo.

Despite the incident, Son had fine form throughout the match, receiving the ball with defenders on his back and making turns as a lone striker should, while distributing balls to his teammates when necessary. Although Son had City on the edge, a goal eluded him, despite continuous attempts to find the back of the net.

Regardless of finishing the game without a goal, Son received a standing ovation from the home fans as he was substituted out of the match at the 89th minute. ESPN FC gave Son the highest rating among Spurs players, a nine point rating, saying Son “justified his selection as a striker, running at the visitors time and time again and setting up Alli’s goal with a cute through ball.”

With the win, although City is still at the top of the table, Spurs remain the only undefeated club in the EPL.

Immediately following the win over City, Son boarded a plane to Korea as he is slated to take part in the coming international matches.

Son’s current upward trajectory will be that much of a bonus for the Korean national team and its boss Uli Stielike, as the next batch of the final round of the regional qualifiers for the 2018 World Cup comes around this week.

For the third and fourth match of the qualifying games, Stielike and the team will take on Qatar on their home turf in Suwon this Thursday, before traveling to Tehran to challenge their rival Iran on Oct. 11.