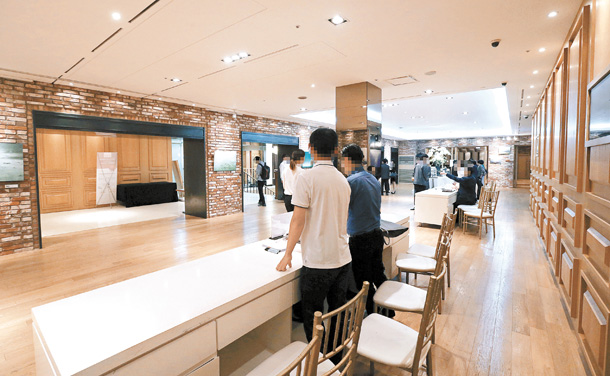 It wasn’t until last weekend that Ms. Lee, the owner of a flower shop in Seoul, realized the impact of a new antigraft law on her and her business. Three days after the law went into force last Wednesday, four out of 10 orders of big floral wreaths were canceled.

Each arrangement cost 50,000 to 100,000 won ($45 - 90). The Improper Solicitation and Graft Act, dubbed the Kim Young-ran law, prohibits public officials, teachers and journalists, as well as their spouses, being treated to meals costing more than 30,000 won or accepting gifts over 50,000 won from someone "related to work." For a wedding or funeral, receiving more than 100,000 won in cash or presents is prohibited.

So if Lee’s customers are going to a wedding and send the bride and groom a 100,000 won wreath, they won’t be able to give the couple any cash in the customary envelope. The wreath would have brought them up to their payment cap.

The wreaths presented in other formal functions - concerts, anniversaries and opening events - are considered gifts, which carries a 50,000 won cap. But because they typically cost more than that, it would be illegal to purchase them for such occasions.

Lee, 46, fully understands the customers’ choices, even if it’s costing her business.

“If people have a 100,000 won cap for a wedding or funeral, who on earth would give flowers instead of money?” asked an angry Lee.

When a JoongAng Ilbo reporter dropped by a wedding held at the Supreme Prosecutors’ Office in Seocho District, southern Seoul, Sunday, the groom, who is a prosecutor, said he received four wreaths.

Only a few days ago, a newlywed prosecutor would receive a room full of wreaths.

A female announcer who works for a local broadcasting station said she received six wreaths for her wedding over the weekend, also pretty paltry. A civil servant who held her wedding at the Seoul Central District Court said she got one.

“Most of my clients are civil servants and public organizations,” said another flower shop owner in Seoul. “Less than a week since the law was enforced, my sales are already plummeting.”

Caddies on golf courses said they’re suffering too because those who come under the act’s purview can no longer have their green fees paid by “someone related to work,” whether it be a private company or a fellow government official.

“It used to be peak season around this time of year, which means I’m supposed to run two rounds per day on weekends,” said one caddy. “Over the weekend, I did only 18 holes in two days combined! My monthly income will probably drop 30 percent by the end of this month.”

A personnel manager at a local golf course said he might have to let a few caddies go soon. A company that provides chauffeur services to customers going to golf courses in the Gyeonggi region said it booked only four rides Saturday, down from the usual 10.