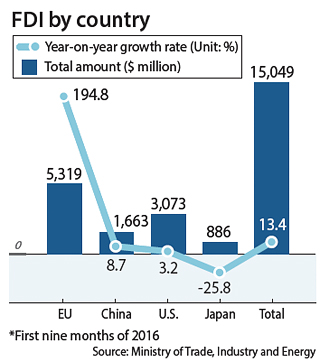 New foreign direct investment pledged to Korea during the first nine months of this year recorded an all-time high of $15.05 billion, a 13.4 percent increase from last year, largely thanks to inflow from China and Europe.

According to the Ministry of Trade, Industry and Energy on Tuesday, new foreign direct investment rose 2.1 percent to $4.49 billion just during the third quarter, a record figure for Q3.

“Foreign investors are thinking highly of the Korean economy and believe it has potential to grow even as the global economy slows and uncertainties such as North Korea’s provocations continue to rise,” said Kim Jae-joon, a director at the ministry.

The amount that actually arrived in the country, however, fell 40.2 percent to $6.68 billion as of the end of the third quarter.

“There were some big investments that came in last year, including Saudi Aramco’s $1.84 billion investment in S-Oil, and this huge amount was the reason this year’s actual number looks less impressive,” Kim said.

“Furthermore, investor sentiment has weakened due to the slow economy, and there was more investment made in manufacturing, which takes longer for the actual money to arrive after it is reported.”

By segment, manufacturing was the big winner, seeing $4.32 billion in pledged investment during the first nine months of this year, up 46.2 percent from last year.

The Trade Ministry said there were more foreign investors interested in growing industries like biotechnology and information technology.

By region, investment coming from the European Union and China rose significantly, while that from Japan fell compared to last year. European countries committed $5.32 billion, up 194.8 percent from last year, accounting for 35.3 percent of new foreign direct investment to Korea this year.

Chinese investment rose 8.7 percent to $1.66 billion. The ministry said that while the Chinese used to focus on Korea’s real estate and financial markets, their investment strategy is becoming more diversified as they invest in various areas such as Korean entertainment and electric vehicles.

The United States pledged a total of $3.1 billion, up 3.2 percent from last year, while Japanese investment fell 25.8 percent to $890 million.

Even though data for the first nine months of this year recorded an all-time high, the government has warned that various uncertainties might hurt numbers later this year.

The government will come up with various measures to deal with such uncertainties to ensure they have limited impact on the local economy and attract more foreign investment to the country.”

The government said it plans to revise tax laws to give more incentives for foreign investment in new industries like robots and innovative cars.

The Trade Ministry said it would also give more benefits to foreign investors who create quality jobs in Korea by offering discounted rent on government-owned properties.