Hanjin’s business usurped by its competitors

Hanjin’s business usurped by its competitors 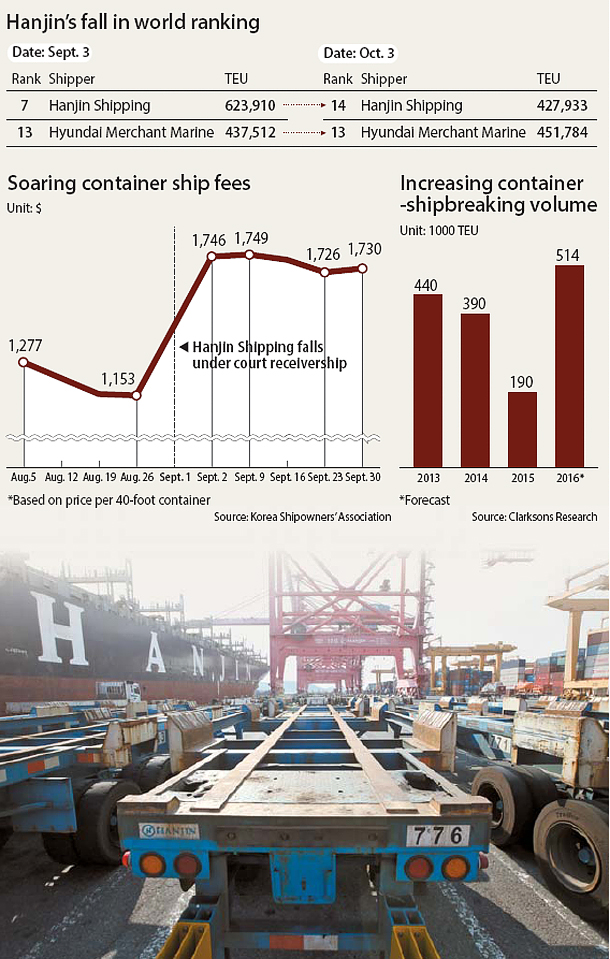 Empty trailers stand in line at a terminal in Busan beside one of Hanjin’s ships, berthed at the port since Sept. 23. [SONG BONG-GEUN]

A monthlong logistics disturbance after the fall of what was once the nation’s largest shipping line, Hanjin Shipping, has resulted in a sharp increase in shipping rates and a slump in vessel charter rates.

The situation has eased compared to the chaotic few days right after the company was placed under court receivership on Sept. 1, but the disturbance is still ongoing and affecting the global shipping market.

As of Sunday, 41 out of Hanjin’s 97 container ships and three out of 44 bulk ships are still out at sea and stuck in ports with loaded cargo. The halt in operations of these vessels led to soaring shipping costs. Based on 40-foot containers, the shipping cost on routes between Asia and the American West Coast rose to $1,730, according to the Korea Shipowners’ Association, a 50 percent increase from the end of August.

Adding to the fallout, as ships once operated by Hanjin are released into the market for lease and sale, the charter rates and secondhand sales prices are nosediving. Hanjin Versailles and Hanjin Santos, both ships that Hanjin chartered out from Greek shipowner Danaos Corporation, used to cost an average $20,000 to charter each day. The average daily charter rate has dropped to $6,000 after Danaos took the ships back from Hanjin and re-chartered them for four to six months to other shipping companies.

The used-vessels market is also seeing prices fall. Some shipping companies are choosing to get rid of their ships instead of reselling them as the resale price has fallen more than 50 percent compared to the beginning of this year. In fact, Swiss shipping company MSC decided to scrap its Viktoria Wulff container ship with 4,546 twenty-foot equivalent unit (TEU) capacity last month. Some shippers from Greece and Germany have reportedly sold their ships to ship-breaking yards.

According to global shipping market intelligence company Clarksons Research, the shipbreaking volume this year is expected to set a record of 514,000 TEU. The record so far has been 440,000 TEU in 2013. The ship-breaking cost, however, is also rising. While the cost to break ships was in the $200 per ton range early this year, it surpassed $300 per ton last month, the JoongAng Ilbo reported.

During the course, Hanjin has seen itself lose the title of world’s seventh-largest and the nation’s largest shipping company, according to data accumulated by shipping industry statistics provider Alphaliner as of Monday. The container ship capacity of Hanjin Shipping fell from 623,910 TEU in September to 427,833 TEU in a month, which puts the shipper at the world’s 14th. Hanjin’s fall has granted the other nation’s shipping line, Hyundai Merchant Marine (HMM), which possesses 451,784 TEU shipping capacity, a step up to the world’s 13th largest. HMM has nabbed the title of the “nation’s largest” at the same time.

In the meantime, to make up for the sinking company’s halted business operations, giant shipping lines have jumped in to increase their market share.

The world’s No. 1, Maersk Line, and second-ranked MSC established a joint shipping route in Busan and deployed new ships. The world’s fourth largest, Cosco Container Lines, also added new ships to Busan and No. 8 Yang Ming of Taiwan adjusted its trans-America routes so that ships can lay over at the Port of Busan.

There has been speculation that Maersk Line may buy out either of the troubled Korean shipping lines. Maersk Chairman Michael Pram Rasmussen said in an interview with Bloomberg that the company plans to grow through active mergers and acquisitions. However, the Wall Street Journal on Tuesday reported that the option is unlikely.

“Buying Hanjin or HMM are rumors invented out of thin air,” a person knowledgeable on the matter was quoted as saying by the paper.

An official from Korea Development Bank, the main creditor of both shipping companies, said, “We have no intention to sell HMM’s assets to Maersk. As for Hanjin Shipping’s assets, we are preparing measures for acquisition through HMM.”

Hanjin Shipping is obliged to submit a turnaround plan to the Seoul bankruptcy court by Dec. 23. Ahead of the submission, Samil PricewaterhouseCoopers, the accounting firm in charge of evaluating Hanjin Shipping’s value, will first hand in their report of assessment by Nov. 4.

The court will make the final decision on the company’s future by mid-November based on submitted data.