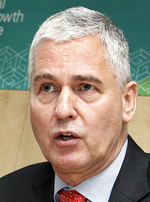 For Frank Rijsberman’s brand of environmentalism, practicality has pride of place.

The new director general of the Global Green Growth Institute (GGGI), a Seoul-based international organization promoting sustainable economic growth, promised to work with the Korean government and other stakeholders to deliver specific implementation plans for the nationally determined contributions set by the Paris Agreement.

“It is exciting to come on board GGGI at this time, as the organization works to drive the post-Paris Agreement agenda forward towards implementation that achieves climate action impact,” Rijsberman said in a press conference held on Tuesday in Jeong-dong, central Seoul. “I look forward to working with GGGI’s members and stakeholders, as well as new partners, to further strengthen GGGI’s contribution to green growth and the delivery of the Sustainable Development Goals (SDG).”

The ratification of the Paris Agreement was tabled at the National Assembly in September for deliberation among members.

Rijsberman added, “The key part of GGGI’s work would be to take those nationally determined contributions and come up with more practical action plans in implementation.”

GGGI, which was founded in June 2010 under the Lee Myung-bak administration’s green growth initiative for environmentally-friendly development, became an international organization in 2012 at the Rio+20 UN Conference on Sustainable Development and currently runs 34 programs in 24 countries.

“We are aware that soon people will say, ‘You’ve been here long enough, what is the impact?’” Rijsberman said. “It does take a few years to sign up governments, establish organizations and focus. But the focus that GGGI now has is very clear.

“We have so-called country program frameworks, which is an agreement between GGGI and governments on what we will work on for the next five years. Within those we will work on creating bankable projects.”

Rijsberman brings experience in both the public and private sector. He was the CEO of the Consultative Group for International Agricultural Research (Cgiar) Consortium from 2012 to this year, the first director of water, sanitation and hygiene for the Bill and Melinda Gates Foundation from 2010 to 2012, and was the program director at Google.org from 2007 to 2010, where he led the application of IT technology to land use and deforestation projects, and the development of the Google Earth Engine.

Although it was his second day in office on Tuesday, Rijsberman promised to deliver compelling green growth stories based on evidence.

“[We will soon have for you] stories of impact, change,” he said, “to demonstrate that green growth is indeed working in countries where we are.”