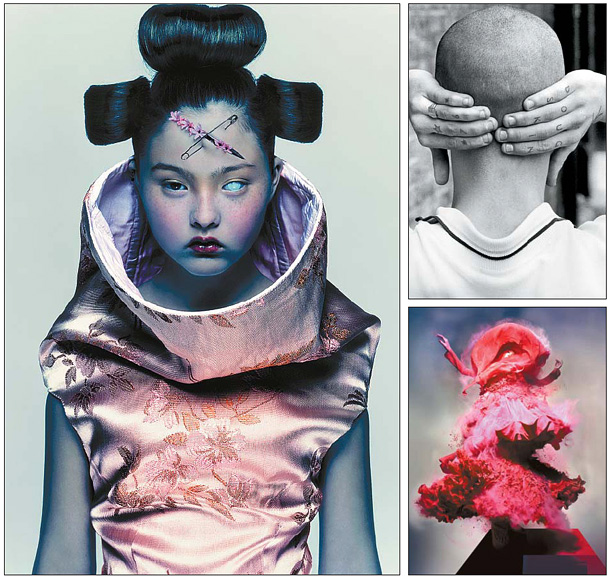 Art is communication and, in the context, fashion is art, British fashion and documentary photographer Nick Knight said on Wednesday. He was in a preview of his first-ever solo exhibition in Korea, which kicks off today at the Daelim Museum west of Gyeongbok Palace in central Seoul.

The show, titled “Nick Knight: Image” consists of 110 pieces by the 58-year-old artist. They encompass his very early black-and-white straight photos of skinheads and their subculture in the late 1970s; his digitally-modified fashion photography in the 1990s; and his latest moving images and films about fashion. These serve to highlight his diverse oeuvre.

Knight, famous for collaborations with major fashion designers such as Alexander McQueen and John Galliano, is “the first generation of photographer to combine photography with digital graphics technology,” according to the museum’s press release.

The fourth section of the exhibition, “Painting & Politics” include his early works that he digitally modified for surrealistic and futuristic effects. Among them is “Devon Aoki for Alexander McQueen”(1997), an iconic fashion photograph for the digital era.

The exhibition is divided into six sections in total. Regarding the first section that features his “Skinheads” series, Knight explained that he was young at that time and wanted to push himself to the extreme, so he was fascinated by the skinheads’ culture. He later grew away from the culture, as it became more political - more related to fascism.

“Though the culture of skinheads was against being fashionable at that time, their styles were another kind of fashion,” he said. “It interested me at that time, as they made a statement through the fashion.”

Although the exhibit includes several experimental flower still lifes that stand between photography and painting and a shocking portrait of a dead, skinned monkey, all the others photos on view feature humans, regardless of whether they are portraits or fashion campaigns.

Regarding it, Knight said what is important in his works is “emotional connection.”

“When you take pictures of humans, you are not dealing with their outside - their physicalities such as the forms of their arms or legs,” he said. “Instead, you are dealing with what they have in their inner sides. It’s about emotional connections.”

Go to Gyeongbokgung station, line No., exit No.3 and walk five minutes.