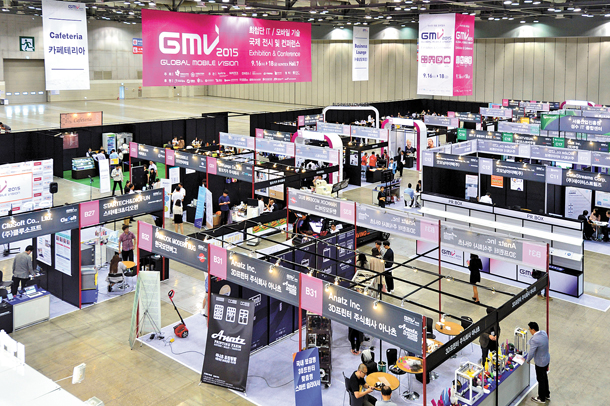 Global Mobile Vision, the nation’s largest exhibition for information communications technology companies and start-ups, begins today with aims to boost Korea’s exports, which have been sluggish since last year.

The event co-hosted by the Ministry of Trade, Industry and Energy and the Ministry of Science, ICT and Future Planning is operated by the Korea Trade-Investment Promotion Agency (Kotra) and Korea International Exhibition Center (Kintex) in Ilsan. It has invited 227 local companies in the ICT sector to set up booths at Kintex, as well as 256 foreign importing companies and 55 foreign venture capital firms to connect local players with global investors and buyers.

The event consists of seminars on hot topics in the industry, including the Internet of Things, virtual reality, robotics and big data, along with exhibitions and investor relations opportunities for 19 of the nation’s promising start-ups.

Amol Mitra, vice president of products and channel at HPE Aruba will be speaking on “Generation Mobile” while Posco ICT President Choi Doo-Hwan will speak on “Internet trend shift toward industrial Internet.”

According to Kotra on Wednesday, more than 2,000 export consultations will take place at the event along with the signing of $4.4 million worth of deals. To further open the chances for domestic companies to enter overseas markets, the agency also invited government officials from 10 countries that plan to open massive ICT business projects, such as building new smart cities, establishing high-speed communications network infrastructure and intelligent transport systems.

“Government officials will be visiting Korea to directly introduce their projects to domestic companies which we hope would expand chances for local players to snatch global projects,” a spokesperson from Kotra said.

Global Mobile Vision, which began in 2008, is marking its ninth year. Last year, 12,000 people visited the event, which runs through Saturday.