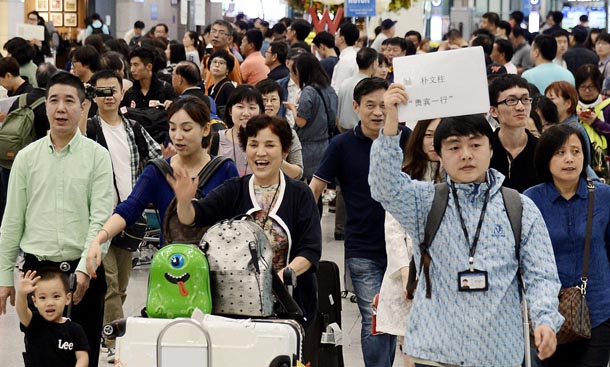 The tourism and retail industries are rejoicing that the Chinese are back. Both industries enjoyed a boon during the weeklong Chinese holiday in the first week of October. Sales from a government-sponsored bargain sale at retailers across the nation jumped 20 percent to 30 percent from a year ago thanks to vacationers from China. This is all good news for an economy that has been in the dumps for a long time.

Still, we are not entirely comfortable with how this all plays out. Department stores are starting to feel alien. The banners are all in Chinese and sales staff welcome visitors in Chinese. Korean shoppers are excluded from the discount offers. Some of the tourists are blatantly rude. They walk out if assistants do not understand what they are saying. It is difficult to tell if we are standing in downtown Seoul or Beijing.

Scale matters when it comes to the economy. Chinese tourists are vast in their numbers. Chinese tourists totaled 135 million last year and they spent 126.4 trillion won ($114 billion) around the world. They are the biggest spenders. Japan, Thailand, Hong Kong and Taiwan are all wooing Chinese tourists. Last year, 6.11 million came to Korea and spent 15.76 trillion won — an amount bigger than the supplementary budget for the second half. They are a windfall for the economy. The government has pulled out all the stops to attract Chinese tourists.
But numbers are not everything. Just 20 percent of what the Chinese spend ends up in Korean pockets. A travel agency staffer says most of the money the Chinese spend here goes back to Chinese travel agencies or airlines.

It is not always true that tourism is a pollution-free, cash-cow business. The theory that tourism has helped the development of the Western Hemisphere has been challenged. Tourists can disrupt order, everyday life, the environment and culture of a nation without helping the economy all that much. Artisans du Monde, a nonprofit fair trade movement in France, claims that a 1,000-euro tourism package brings less than 200 euros ($224) to the nation being visited. Financial Times columnist Richard Tomkins claims that tour groups should be regarded as the earth’s No. 1 scourge as far as the environment and safety is concerned.

A Chinese tourist spent an average of 2.58 million won ($2,313) in Korea last year. About 70 percent was on shopping. They buy mostly foreign luxury brands and some local beauty care and traditional products. The souvenir shops in Insadong sell China-made products. For this paltry amount of inflow, we must yield our streets and shops to the Chinese. Crimes by Chinese visitors are also on the rise. We should not be all that thrilled about the boom in Chinese tourists.

But we cannot turn away guests who choose to visit our nation. There is a solution. We should upgrade our tourism standards. We should woo individual visitors instead of loud, rude groups. Many mainlanders know how to spend their money and time well. They are attracted by new lifestyles, foods and novel experiences. Richer individual travelers make up 80 percent of Chinese tourists. The less rich go on cheap group tours. We must end visa waivers. We must stop making ourselves cheap.

More importantly, we must find ways to draw Chinese capital. We must make ourselves a country in which the Chinese want to invest, learn and live. Two years ago, Cho Won-dong, former presidential secretary for economic affairs, said Chinese black money has been looking for an escape route to avoid an anticorruption crackdown there. That money is being used to shop for enterprises and real estate properties around the world. Black money held by the Chinese is estimated to top 9,000 trillion won. There is still time to attract some of that money into Korea.