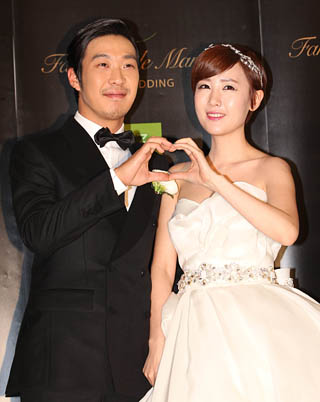 Singer Byul is pregnant with her second baby. She and her husband, the comedian and singer Haha, are expecting the newborn to arrive in March 2017.

“Byul is in her fourth month of pregnancy,” the couple’s agency, QUAN Entertainment, said Friday. “The couple is extremely happy with the news.”

The singer is currently receiving prenatal care, while Haha is keeping busy with his scheduled appearances.

The celebrity couple married in 2012 and had their firstborn son the following year.

Byul debuted as a singer in 2002 with the single “December 32nd.” She took home the title of Best Female Rookie at the SBS Music Awards that year.

Haha originally debuted as a member of idol group Z-kiri in 2001, though he is generally associated with his appearances on comedy variety programs such as MBC’s “Infinite Challenge” and SBS’s “Running Man.”

He has been maintaining his music career through a reggae project with fellow artist Skull.