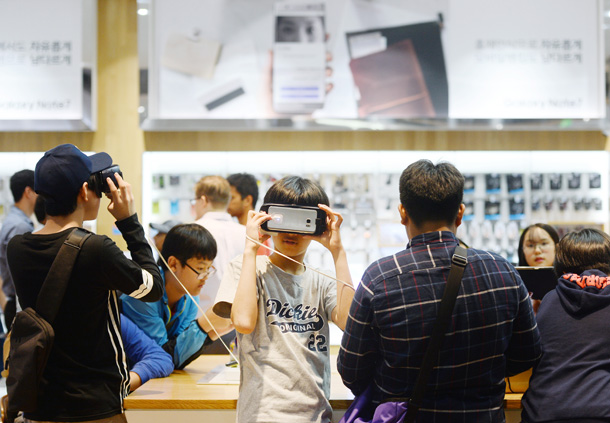 Visitors at the D’light shop inside Samsung Electronics’ Seocho headquarters in southern Seoul try out virtual reality devices on Friday, when the tech giant unveiled preliminary earnings results for the third quarter. [NEWSIS]

Samsung Electronics estimates third-quarter operating profit to have grown 5.55 percent to 7.8 trillion won ($6.99 billion), according to the company’s latest guidance report released Friday, a better-than-expected figure that came largely from its memory chips and displays.

Although an increase from last year, it falls short of second-quarter performance by 4.18 percent, when the company surpassed 8 trillion won in quarterly profit for the first time since 2014.

The recent recall of the company’s flagship Galaxy Note7 tamped down analysts’ expectations for a favorable quarterly performance. The disclosed guidance beat average analysts’ estimates of 7.58 trillion won, according to data compiled by Bloomberg.

It is not yet clear how much loss from the recalls is reflected in the company’s third-quarter results, but most analysts believe there was over 1 trillion won in operating loss from the Galaxy Note7 debacle. Third-quarter earnings by business division will be released at the end of this month. 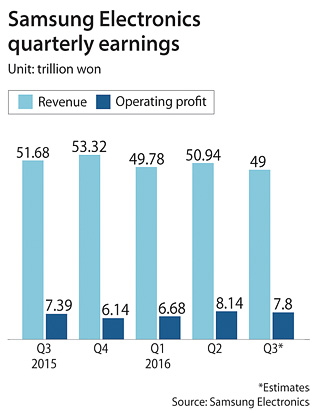 “If we suppose around a trillion won loss from the Galaxy Note7 recalls was applied to the report, it seems strong performance in semiconductors and displays along with strong home appliance sales backed the earnings,” said Kim Sun-woo, an analyst from Meritz Securities.

Mirae Asset Securities on Friday forecasted Samsung’s semiconductor business to post 3.59 trillion won in operating profit, which would mean a 36 percent increase from last quarter. It expects the IT and mobile communications division, responsible for smartphone sales, to record 2.86 trillion won, a 34 percent drop from last quarter. The display business is expected to post a 680 billion won profit, a 383 percent jump from the previous quarter.

Shares of Samsung Electronics on the Korean stock market rose 0.89 percent on Friday to close at a record-high price of 1,706,000 won, continuing its rally into a fourth trading day.

The electronics giant has fared well in the third quarter considering its Galaxy Note7 headache, but recent news of supposed replacement devices catching fire may come back to bite the company.

“Samsung could face an unusual second recall of its Galaxy Note 7 smartphones if one that caught fire aboard an airliner this week is a replacement device as its owner says,” Bloomberg reported two former U.S. safety officials as saying.

The world’s top smartphone maker has already had to recall 2.5 million devices sold or preordered due to possible risk of the battery overheating.

On Friday, LG Electronics also released preliminary numbers for its third quarter. The company estimates 283.2 billion won in operating profit, down 3.7 percent from last year, while revenue is also estimated to have fallen 5.8 percent to 13.2 trillion won.