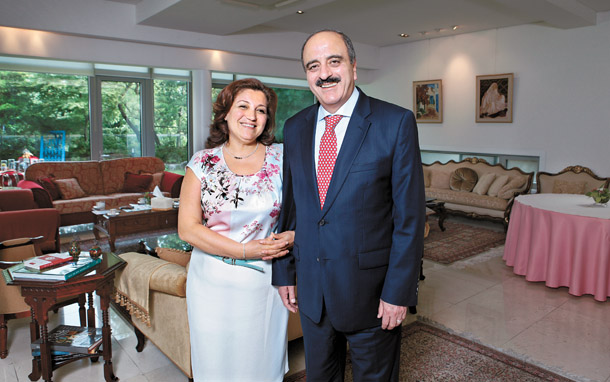 When asked to highlight a key moment of his four-year stay in Korea, Tunisian Ambassador Mohamed Ali Nafti mentioned the opening of the “Window on Tunisia” zone at the National Library of Korea in Seocho District, southern Seoul, last August.

The Tunisian government had donated over 200 books on Tunisia’s history and culture, and the ambassador was able to set up a separate section on the library’s third floor exhibiting the publications and promoting his home country.

“I was eager to guide Koreans into Tunisia’s history, culture and arts, because not very often can people here gain the experience,” said Nafti. When he and his wife, Kalthoum Khanteche Nafti, have local guests over at their residence, the couple makes every moment as authentically Tunisian as possible, especially through music and food. Mrs. Nafti spends a lot of her time these days personally tutoring their chef, Shin Se-gae, who has a background in Korean cuisine.

“She’s not perfectly Tunisian yet, but she’s getting there,” said Mrs. Nafti. “I’m teaching her all I know.” 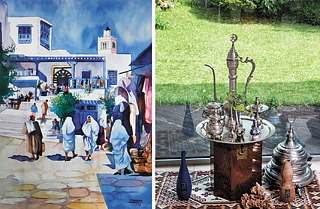 From left: A watercolor painting of Sidi Bou Said, a village north of Tunis, the Tunisian capital. Mrs. Nafti likens the area to Korea’s Bukchon Hanok Village in Jongno District, central Seoul, because of the high concentration of traditional houses; The couple’s favorite area within the house exhibits a traditional Tunisian tea set near the main entrance. [PARK SANG-MOON]

A. The residence is a three-story building in Seongbuk District, northern Seoul, constructed in May 2008. We moved in last year. Our neighbors are Hyun Jung-eun, the chairwoman of Hyundai Group, and famed actor Bae Yong-joon, among others.

The house was designed by an architectural company that previously worked on many other ambassadors’ residences, including those of the E.U., Sri Lanka, Peru and the Philippines. We mainly host our guests on the first floor and use the second floor as our living quarters.

Surrounded by transparent glass, this house has a very artistic ambience, which both my husband and I are very fond of. As with the interior, we tried to mix Tunisian and Korean cultures, creating a harmony between both traditional aspects.

What’s your favorite item in the house?

I adore the glasswork designed by Sadika Keskes, a Tunisian glassblowing artist educated at the Tunis Institute of Fine Arts and trained as a master glassmaker in Murano, Italy. She devoted herself to the revival of blown glass in Tunisia and met great success with forms and colors. All the pieces in our residence are handmade, and some light up into lamps. I also have great affection for our carpets here, another highlight of Tunisia’s rich culture.

There’s a corner in our house near the main entrance of the first floor that illustrates samples of Tunisian history. It’s a very meaningful display of a variety of items from the Carthaginian era and the Arab and Andalusian heritage of Tunisia. The beautiful mixture of Tunisia’s 3,000 years of cultural heritage takes our visitors on a nice journey deep into its long history. In the backdrop, there’s a lovely garden that can be seen through a glass window covering the entire wall.

At another corner by our reception hall, there’s an area that we always escort our Tunisian guests to. I like to call it a “museum of Korean culture” because it’s filled with many traditional objects we’ve collected through our stay here. Our Tunisian guests enjoy them very much.

In part to enrich their experience in Korea furthermore, we’ve hired a Korean chef who often cooks local food for our Tunisian guests. She didn’t know how to cook Tunisian food when she first arrived at our house, but I’m teaching her the ropes and luckily, she’s following through quite well. 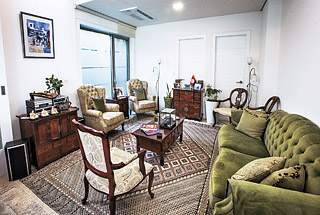 A corner next to the reception hall features a wide collection of Korean objects the couple acquired during their stay here. [PARK SANG-MOON]

What does a typical house in Tunisia look like, and can you compare it with Korean homes?

I would rather like to compare the traditional Korean houses, or hanok, in the Bukchon Hanok Village in Jongno District, central Seoul, with the houses that make up the village of Sidi Bou Said, a town located 20 kilometers (12.4 miles) north of the Tunisian capital of Tunis.

I could never forget the first time I visited Bukchon Hanok Village because it instantly reminded me of Sidi Bou Said: the throngs of tourists and the traditional vibe. The town itself is a main tourist attraction in Tunisia, best known for its extensive use of blue and white.

Borrowing descriptions from Tourism Tunisia, a travel agency, the entire town is located on top of a steep cliff, which overlooks the Mediterranean Sea. The view is absolutely phenomenal. The entire town is stunning, with flowers draped from almost every wall and doorway, and beautiful flowing vines hanging throughout the entire area. The town is said to have inspired famous artists Paul Klee and writer Andre Gide. The streets, most of which are quaint cobbled streets, are lined for the most part with souvenir shops, coffee shops and art shops, setting off an intense feel of artistry.

Houses here are typically traditional Tunisian houses that can be widely seen in the countryside, not in densely populated cities. One key aspect is that the doors are painted blue. I would love to have a traditional house of my own, but realistically, as with any other traditional houses, maintenance is mainly why a lot of people like me choose not to. When something breaks in the house, it’s difficult and costly to find the right people to fix it back to normal.

Our front door here at our residence isn’t colored blue, unfortunately, but we do have two blue window frames in our backyard, leaning on a side of a wall. They remind me very much of my home country. 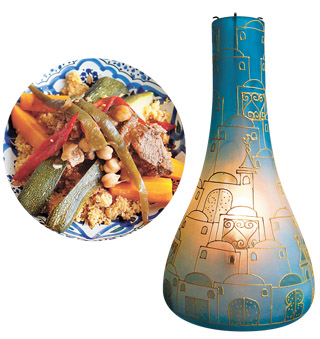 What are those dolls displayed in the backyard?

They each wear a traditional costume representing a different region of Tunisia. I often have them out when I have foreign guests over at the house.

For readers who are interested in Tunisian cuisine, do you have any recommendations in Seoul?

There’s a Tunisian restaurant named Couscous in Jongno District, central Seoul, which is run by a Korean lady who visited Tunisia several years ago as a volunteer for the Korea International Cooperation Agency (Koica) and taught hansik (traditional Korean cuisine) there.

She returned to Seoul and decided to open a Tunisian restaurant of her own, adding a nice Tunisian touch in the interior and serving very fantastic, authentic Tunisian food. The very title of her restaurant, Couscous, is a staple food of our country, which is made of small steamed balls of semolina, topped with various vegetables and lamb or fish.