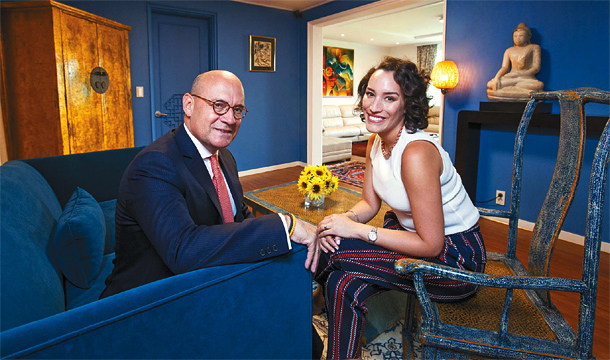 Peruvian Ambassador to Korea Jaime Pomareda and his wife, Susana Yturry, at their residence in Itaewon-dong, central Seoul, last month during an exclusive tour with the Korea JoongAng Daily. [PARK SANG-MOON]

When looking to display their national heritage, Peruvian Ambassador to Korea Jaime Pomareda and his wife, Susana Yturry, don’t stick to the traditional side of things.

Home to the Incan Empire (1438-1533), the largest empire in pre-Columbian America, the historical record indicates that humans have lived in Peru since 9,000 B.C. The couple’s residence in Itaewon-dong, central Seoul, however, shows few historical traces. It relies instead on a contemporary Peruvian-Asian look that the top envoy picked up from his over 15 years working across the continent.

“There’s a pleasant balance here between modern Peruvian arts and other Asian homeware,” said Pomareda. “I try to pull out the traditional Peruvian aspects through contemporary pieces, because simply put, I’m just not interested in old objects.” This forward-looking aesthetic suits the couple, who married last year and moved into their home just a few months ago. Yturry contends that the home’s modern cross-cultural harmony allows it to tell the life stories of its residents.

Q. Could you describe the residence?

A. Our home is rented and located in Itaewon-dong, near the Grand Hyatt Hotel. It’s a nice and international neighborhood, with many ambassadors, foreign businessmen, and of course, friendly Koreans as our neighbors.

The interior design of the house was entirely done by us, including some renovations to expand the living room. The house has five rooms - three in the second level, our private quarters, and two in the basement. We’re the first representatives from Peru to live in the house, and we moved in a couple of months ago.

At the house, visitors will find a mixture of modern Peruvian paintings and other strong influences from Asia, where my husband has been working for more than 15 years now. We try to balance between what we want to show from our own country and what we have learned throughout our journey touring other nations. We also own two cats here: Dolce, a Peruvian female, and Oliver, a Korean male.

Do you host any summertime events at the residence?

We’re planning to organize, among others, a typical Peruvian skewer feast called anticuchada, an informal gathering serving anticucho, or grilled beef heart. All the Peruvian students in Korea, which amounts to about 60 to 70, will be invited for the special feast. It’s a very popular street food in Peru, one that can easily be cooked at home if you have a grill, which we have in our back yard.

Speaking of food, are there any Peruvian restaurants in Korea?

There are five Peruvian restaurants in Korea: Machu Picchu and Sabor Latino in Dongducheon, Gyeonggi; Sabor Peruano and Cevicheria 210 in Osan, Gyeonggi; and Tigre Cevicheria in Hannam-dong, central Seoul.

What’s your favorite object in the house?

I’m very attracted to the Peruvian paintings and art pieces we have on our walls, all modern representations of Peruvian art.

My personal favorite is Constantino Laura’s “Sunrise,” which hangs in our living room facing the kitchen. The rich tapestry has a modern design, made by ancient production techniques. It’s a representative piece of Peru, especially the Andes, where textiles boast a long, renowned history.

While 10 million of the 30 million people in Peru reside in Lima, the capital, the rest is scattered along the coastline, in the jungle, the Amazon and up on the Andes. Such geographical diversity gives us cultural richness, but on the other side, makes integration difficult.

Another painting that my husband is especially fond of is “Manto,” by Elvis Garcia Moran. My husband frequently helped him organize art exhibitions in Vancouver, and one day when he was in Peru, the artist arrived at his doorstep with the same painting, saying it was a gift of gratitude. The piece now hangs in our living room, near “Sunrise.”

Was the mirror hanging in front of the entrance purchased in Peru, too?

Yes. It’s typical artwork from Ayacucho, a city in the Peruvian Andes, which is very famous for painted glass mirrors. We found the design very intriguing, not traditional, but contemporary and chic. A smaller, similar version hangs in our guest restroom.

What is your favorite area within the house?

The most relaxing place for us is the Blue Room, located right next to the living room. For us, it’s where we listen to music and read books.

When we first arrived here, the room was a guest room, but then we thought the living room was too small so we consulted with the house owners to redesign the area to have the two places connected. We were deeply fond of the blue chairs in there, and thought it would match with blue walls. So we took the risk and ended up with a nice, cozy blue room.

Other than that, we also love our kitchen, since we very often cook together and practice new recipes, both Peruvian and international.

In Peru, are there any rules of decorum for hosting guests?

Before getting into the main meal, we usually share lots of finger food and drinks, including our national beverage, pisco sour. For long hours, we celebrate gatherings with our close friends through food and conversation, always offering new, creative dishes without disconnecting from traditional Peruvian culinary roots.

President Park Geun-hye made an official visit to Peru last year. Were there any tangible outcomes afterward?

There were many. Bilateral cooperation increased in education, and there were more Korean companies interested in making investments in Peru.

It also sped up the entrance of Peruvian mangos to the Korean market, officially launched in January at several branches of the Shinsegae Department Store, Home Plus, and other shopping centers. It’s being very well received by Korean consumers, and the embassy is confident that import volumes will increase for sure.

One of the most popular Peruvian imports that many Koreans aren’t aware of is squid. It’s our best seafood export to Korea.

For some of our readers who are interested in visiting Peru, do you have any personal recommendations?

Peru is a tourist destination with some of the world’s most famous attractions, the most important being Machu Picchu, which was claimed as one of the New 7 Wonders of the World in 2007 by a popularity poll organized by the New 7 Wonders Foundation, based in Zurich, Switzerland.

Additionally, there’s also the Nazca Lines, a series of ancient geoglyphs in southern Peru, which can only be seen by flying over them. Our natural reserves in the Amazon were named as a Unesco World Heritage Site.

Peruvian cuisine is one of the trendiest gastronomies in the world now. A restaurant named Central was recently chosen as No. 4 in the world and No. 1 in Latin America on the World’s 50 Best Restaurants list in 2016.

From left: A ceramic ornament, installed near the house’s entrance, depicts everyday life in the Andes; a look inside the residence offers a glimpse of contemporary Peruvian art and Asian home decor, all personally purchased and owned by the couple, both travel enthusiasts of Asia; Constantino Laura’s “Sunrise,” a vibrant tapestry representative of the Andes, where the culture surrounding textiles dates back thousands of years, hangs in the couple’s living room; a painted glass mirror, a highlight of Andean mirror-making, hangs across from the home’s entrance. [PARK SANG-MOON]