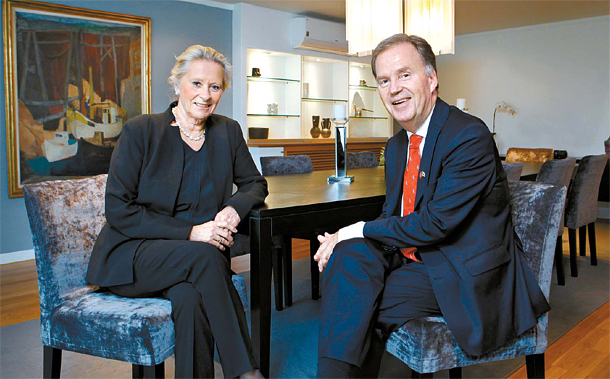 Norwegian Ambassador to Korea Jan Ole Grevstad and his wife Lise Grevstad pose in their dining room during a house tour with the Korea JoongAng Daily. [PARK SANG-MOON]

When Lise Grevstad took a leave from work last year to accompany her husband to Seoul, it was the first break she ever had in over 25 years in her profession, except for her four-month maternity leave when her daughter was born.

A career diplomat herself, Grevstad formerly served as Norway’s top envoy in Estonia and held various leadership positions in Oslo and abroad. Now in Seoul, her business card reads: “wife of the ambassador.”

“There are so many things I want to do,” says Grevstad. “I bought a huge camera in Estonia and brought it here with me. Nowadays, I’m spending time with a Korean photographer friend who teaches me how to use it,” continuing that one of her favorite hobbies is hiking the beautiful mountains in Seoul.

“I teach global leadership and networking once every three weeks for an hour. We discuss various topics like gender equality, social affairs and foreign policy. It takes about 25 percent of my time to prepare class materials.”

From left: The couple’s reception hall is representative of modern Nordic design in its simplicity, functionality and minimalism; Thorbjorn Lie-Jorgensen’s “Drying Fishing Net” (1949) hangs at a corner of the dining room, reflecting what the couple calls “the soul of Norway,” the beauty of its nature.

A. The house has been the home of six different Norwegian ambassadors and we are the seventh to occupy it. The Norwegian government purchased the house in 1990 and it has been Norwegian property ever since. It’s a wonderful two-story house evocative of modern Nordic design in its simplicity, functionality and minimalism. Everything inside the house - including floors, furniture and pieces of art - was designed and selected by Metropolis arkitektur & design, an architectural company in Norway, on assignment from the Norwegian Ministry of Foreign Affairs. Furniture is mainly from Slettvoll and lamps from Northern Lighting, both well-known Norwegian companies. My husband and I lived here since November 2015, and we love it because it pretty much reflects modern Norwegian culture. The beautiful garden makes us feel close to nature.

Back in Norway, we live in an apartment in downtown Oslo, with the sea and ski tracks only 10 minutes away by car. We also have a summer house with a huge beautiful garden and large windows that make us feel very close to nature in the same way we do here.

Which area are you most fond of?

We love the sofas near the fireplace in the living room, from which we’re able to enjoy a nice view of our garden. The fireplace is a necessity in a Norwegian home due to the cold climate, both in old times and today. In our apartment in Oslo, we have three fireplaces.

During winter, temperatures usually drop to about minus 10 to 5 degrees Celsius (14 to 23 degrees Fahrenheit) in Oslo, while in the northern areas, it can slip even more to minus 40 to 30 degrees. A fireplace is a very social area within the house. After a ski, families usually gather around to warm up and drink hot cocoa.

Our favorite object in the house is a painting in our living room by Thorbjorn Lie-Jorgensen (1900-1961) from 1949, titled “Drying Fishing Net.” Lie-Jorgensen studied goldsmithery at the National College of Art and Design in Oslo, and painting at the National Academy of Fine Art in the same city. His study at the academy coincided with his breakthrough as a goldsmith.

After successfully hosting an exhibition in Stockholm in 1929 using Norwegian silver, he travelled to Paris, where he studied modern French painting. A number of his works from the 1940s mainly feature designs of the ocean and horizon with boathouses and boats, outcrops and rocks, mooring piles and poles, a beacon or a lighthouse. He used these pictorial elements and created new compositions out of them, making them barely recognizable. This painting is part of that genre.

For me and my husband, the painting reflects the soul of Norway: the nature, mainly mountains and rocks. Like Korea, Norway is a mountainous country, with nearly two-thirds of the territory covered by mountains. 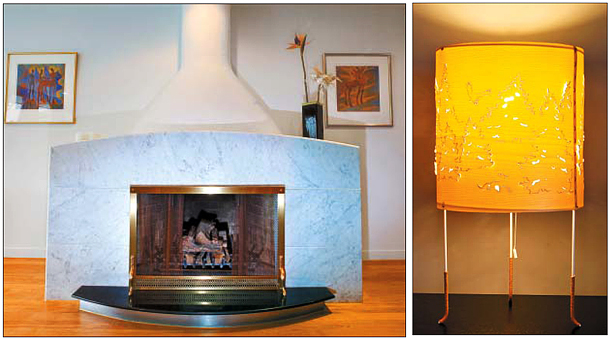 From left: A fireplace in the reception hall represents a key part of Norwegian home life, where families usually gather for a warm cup of hot chocolate after a ski; A lamp from Northern Lighting is one of many iconic Norwegian furniture pieces in the couple’s house.

Other than the fireplace, what are some key aspects that define a Norwegian home?

We have a harsh climate in Norway and the temperature gap between summer and winter is huge. This is reflected in the long tradition of building houses with wood. Back in the old days, houses were traditionally built with small rooms and windows to keep the warmth inside, while roofs were steep so that snow could slide off.

Nowadays, houses and apartments are inspired by Nordic design, where functionality and minimalism play a key role and houses are meant to be open and airy. Large windows let in plenty of natural light and enable dwellers to appreciate fantastic views.

How do your countrymen treat visitors at their home?

During the summer time, we serve Norwegian seafood like shrimp and crabs with white wine. For dessert, strawberries are offered. In autumn, we serve a lot of lamb meat, while for Christmas, each region follows their own food tradition. When visiting each other, we usually bring flowers or some wine for the host. One tradition that’s uncommon in the rest of the world is that when eight or more people are seated at the table, the person sitting right next to the hostess is expected to give a speech expressing gratitude for the hospitality.

What traveling advice would you give to a foreigner visiting Norway?

I would definitely recommend visiting the fjords and mountains in the western and northern parts of Norway. As an Arctic nation, Norway boasts stunning sceneries during the winter, chiefly the northern lights (aurora borealis) that light up the dark skies with wonderful colors. In summer, visitors can enjoy the midnight sun, when part of the sun’s disk is visible above the horizon during local midnight. If you’re more of a city-person, Oslo and Bergen are great places to go. In terms of food, try the vast variety of fresh seafood, including cod, king crab, shrimp and scallop, to mention a few.

What’s one virtue of Norway that sets it apart from the rest of the world?

Norway is among the top three happiest countries in the world, and I believe that’s due in large part to the egalitarian society. Equal opportunity for all has not only been a national slogan, but a core priority of Norway. This is reflected in the fact that we, for many years, have been chosen as one of the most gender-equal countries in the world according to the annual Global Gender Gap Report, measured by the World Economic Forum.