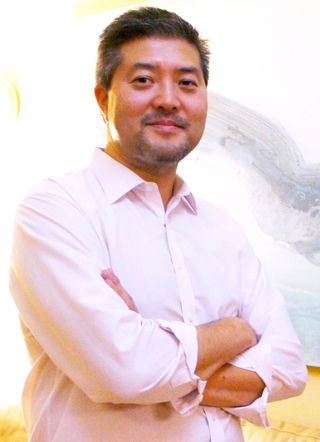 Bernard Moon, co-founder and partner at SparkLabs, stresses that a successful business depends on how much the founder loves his or her product and idea. [SPARKLABS]

Bernard Moon, co-founder and partner at Korean start-up accelerator SparkLabs, divides his time between his home in Palo Alto, California, and Korea. Dashing back and forth across the Pacific Ocean, the Silicon Valley entrepreneur’s goal is to help Korean start-ups go global.

“It all boils down to why you’re doing the business,” Moon said over lunch at a casual Italian restaurant in central Seoul during one of his trips on Sept. 23.

“Just this morning, someone came up to me and said, ‘I want to start an online-to-offline business with cars,’ so I asked why and he said the auto market seems to be growing bigger,” Moon said. “That’s not going to work. I know the founders of an auto-related start-up, and they are just crazy about cars.”

While some might jump into a new business with vague goals, the start-up-nurturing expert stresses that a successful business depends on how much the founder loves his or her product and idea.

He calls it the “mission” and says that how much people are willing and eager to realize that mission is the make-or-break factor for many start-ups looking to get to the next level.

Moon speaks from experience. As a serial entrepreneur during his youth, he signed up to 20 credit cards to keep his ideas afloat, and he still speaks fondly of the experience as the “most valuable” time in his life when he found true joy in building something from the ground up.

“I was rejected like a hundred times by investors,” Moon said referring to his first experience founding a start-up. “It didn’t end well, but we loved it.” Now, his past failures have become an important asset in advising burgeoning start-ups.

Moon, a Korean-American, originally planned to work in government, but during his second year studying public policy at Columbia University’s graduate school, two friends recruited him for their start-up. One of them was Jimmy Kim, who later co-founded SparkLabs with him.

Instead of going to Washington, D.C., Moon joined Kim and founded two start-ups together. Then in 2012, Lee Han-joo, co-founder of a top-five global cloud computing company called Hostway, approached the two to launch the accelerator SparkLabs.

Accelerators, which select promising early-stage start-ups, invest in them and provide advice over a fixed period (usually three to six months) to help them grow, was a relatively rare concept at the time in Korea. So the three co-founders modeled SparkLabs off the U.S.-based Y Combinator.

The program has produced 56 alumni so far. The total estimated value of its portfolio companies amount to over 700 billion won ($629 million), according to accumulated figures provided by the accelerator.

Among about 23 accelerator programs in Korea, SparkLabs is best known for its focus on taking start-ups to the global arena. It’s a policy that Moon came up with from his experience in Silicon Valley. SparkLabs is currently a member of the Global Accelerator Network, the only Korean accelerator to be part of the world’s 50 most influential accelerators.

Moon recently sat down with the Korea JoongAng Daily to offer his insight into current start-up trends at home and abroad. Here are edited excerpts from the interview.

Q. What did you see at Y Combinator’s Demo Day as part of the recently-finished summer batch of companies?

A. I saw more international start-ups, the general trends of Silicon Valley, particularly in the fields of artificial intelligence, machine learning, drones and robotics.

What are the start-ups applying for your support like these days?

Healthy and still very energized. They are getting better and offer a wider range of products and services. We see a flight of talent from bigger companies such as Samsung Electronics and McKinsey.

Would you say the quality of applicants is getting better?

The talent from key areas such as software, user experience and user interface design is world-class. General management and product development is not as strong. But after Beijing, Seoul probably has the best start-up ecosystem in Asia. Even in ecosystems like Singapore, the talent is not there..

President Park Geun-hye has been pushing forward policies to foster the so-called creative economy. Did the policies pay off?

I think it’s more with the timing. It is true government policies like TIPS [the Accelerator Investment-Driven Tech Incubator Program for Startup, in which the government provides funding for tech start-ups] greatly contributed to the start-up ecosystem in Korea, but I don’t think it can be put into a direct cause-and-effect relationship.

To be fair, I think the government played well with the timing. Both business and politics are all about timing, and the two supplemented each other well.

As the Park administration is nearing its end, do you suppose the policies and government support measures will change?

Yes, well, we do have concerns on that. Policies under the creative economy slogan did create synergy to improve the start-up ecosystem here.

What changes do you think should be made with Korea’s business environment?

Regulation-wise, they have to look at things that don’t hinder innovation: the flexibility of establishing a company and filing for bankruptcy. Time magazine wrote several years ago that one of three reasons entrepreneurship is so prevalent in the United States is the generous bankruptcy laws.

To launch a start-up in the U.S., you can set the share price at low prices like a dollar. Previously, the minimum share price or paid-in capital per share [in Korea] was 5,000 won. This hinders start-up employees from exercising their stock options, especially as companies grow in valuation. To exercise their options, employees will simply not do it, or they have to take out a loan. If the U.S. had the same laws as Korea, there would be 50 percent fewer start-ups in Silicon Valley.

This combined with the lack of a standard practice such as in Silicon Valley, where start-ups in their series-A rounds [a company’s first significant round of venture capital financing] set aside a stock option pool of 15 to 20 percent of the company, has hurt the innovation ecosystem in Korea.

The beauty of Silicon Valley, which many don’t know, is that the ecosystem replenishes itself with each big initial public offering or M&A. With Google, there were thousand of millionaires created, and many of them became angel investors to fund the next wave of entrepreneurs.

Would the eased regulations boost entrepreneurship in Korea?

If you look at Korea, it’s such an interesting dichotomy between some of the most advanced consumer behavior related to technology but with archaic regulations. Look at mobile banking or the usage of in-carrier billing. Korea is probably the leader in this behavior globally, but its regulations probably prevented it from starting a service like Venmo, which most 20-somethings in the U.S. use for small money transfers.

In Korea, Venmo would have needed $1 million of paid-in capital and a special license to even think about launching a new service. Korea, in my opinion, should be a fintech leader in the world but isn’t due to its archaic regulations and laws.

[The Financial Services Commission on Wednesday announced plans to loosen regulations so that money-losing start-ups can also publicly list under so-called Tesla requirements. Previously, no companies with deficits, such as Tesla when it first listed, would have been eligible to apply for an initial public offering in Korea.]

Can you suggest any changes in Korean culture?

I don’t know whether it’s because a big part of Koreans’ lives are decided based on a one-day college entrance exam, but people tend to greatly fear failure. Culture and even legal systems in Korea reflect that tendency.

Silicon Valley is relatively generous to failures. Here in Korea, if there are about three years of a blank period in your career, people ask, “So what did you do?” And if somebody says, “I founded a start-up but failed,” you don’t have much more to say.

People in the U.S. think proudly of their careers even after working for a small company. The bright side is that I do see the trend changing toward the younger generation.

Can you introduce some of the potential start-ups from your batch?

Among our eighth batch, there is a start-up called Queensbucket, which sells high-end sesame oil products. The CEO of the start-up can go on and on about oil. He is definitely crazy about oil. Many tend to think start-ups will be doing business related to information communications technology, but it’s kind of a low-tech food tech, as we call it. The CEO makes high-end sesame oil products that are healthier and with a milder scent, inspired by sesame oil from his childhood.

When one of our mentors, Scott, visited here for a mentoring session, he said the start-up has good potential since healthier foods are very popular in Silicon Valley and in the U.S. these days. So far, we have introduced them to Food & Wine Magazine’s test kitchen and a couple of celebrity chefs who regularly appear on the Food Network. There will be more of these types of activities and support in the coming months.

Do you see a lot of female entrepreneurs these days?

More and more. There has always been at least one or two female CEOs in our batches. Even in applicants, you see a lot of female CEOs who apply.

What about the U.S. and Korea in comparison?

Similar. Silicon Valley is very male-dominated. You’d probably see more equality in places like Beijing and Shanghai, even at the high leadership of tech companies.