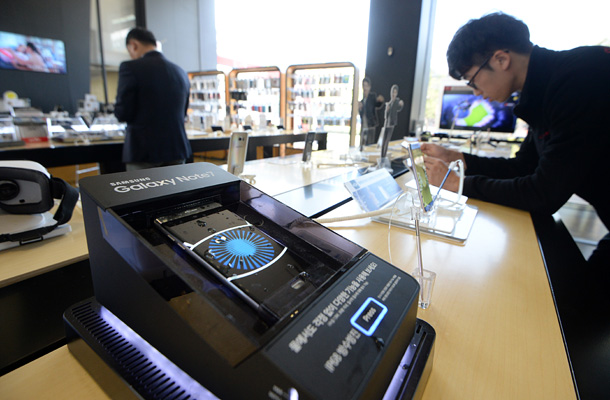 A Galaxy Note7 is displayed in a showcase at a KT office in Gwanghwamun, central Seoul, on Monday. [NEWSIS]

The new explosion reports have also led two major mobile carriers in the United States, AT&T and T-Mobile, to suspend sales as well as exchanges of the troubled product during the weekend.

“We are adjusting the supply amount of Galaxy Note7s that recently had burn damages in order to begin a closer investigation and improve quality,” Samsung Electronics said in a regulatory filing Monday evening.

“We will repost the filing within one month once the details on the decision are finalized.”

Earlier in the day, a source affiliated to one of Samsung Electronics’ partnering companies said the production line in the Vietnam plant, which is responsible for the global shipment of the new gadgets, has been put to a stop.

“Its production has temporarily stopped out of safety concerns for global consumers, not only in the U.S., but also in China and of course in Korea,” the source added.

It continued, “Samsung Electronics is currently cooperating with the Korean Agency for Technology and Standards as well as U.S. Consumer Product Safety Commission (CPSC) and China’s regulatory authorities to investigate the cause of recent cases and, if necessary, Samsung Electronics is going to roll out additional measures.”

At least eight explosions involving the replaced Galaxy Note7 were reported in global news outlets during the past few weeks, including one in the United States when passengers evacuated a Southwest Airlines flight before it took off on Oct. 5 due to a smoking Galaxy Note7.

The CPSC is currently looking into the case, and the result of the investigation is expected to come out this week. Another case involves the new product flaming up inside the back pocket of a user in Taiwan on Oct. 8.

AT&T, one of the biggest distributors of Samsung mobile phones, said they will no longer sell the new Galaxy Note7 nor exchange the old one with new ones.

“Based on recent reports, we’re no longer exchanging new Note 7s at this time, pending further investigation of these reported incidents,” an AT&T spokesperson was quoted as saying in Bloomberg. Another major U.S. mobile carrier, T-Mobile, issued a statement on its website Sunday that they are “temporarily suspending all sales of the new Note7 and exchanges.”

It also said, “We encourage customers to stop using and power down their recalled devices and return them to T-Mobile.”

Whether the “supply adjustment” notice posted by Samsung Electronics means the smartphone manufacturer will go through a second recall or will completely discontinue the product is not yet known.

But analysts believe the incident will cost the country’s top technology company millions of dollars to regain consumer trust and recover their damaged brand image.

“If sales of Galaxy Note7s are suspended in the fourth quarter of the year,” analyst Peter Lee at NH Research Center said, “Samsung Electronics will have to deal with 700 billion won ($630.8 million) worth of lost opportunities.”

The Suwon-based semiconductor company is already facing an estimate of over 2 trillion won worth of losses due to the unprecedented large-scale recall plan initiated on Sept. 2, encompassing 2.5 million Galaxy Note7 units already sold globally, which are installed with potentially explosive lithium batteries.