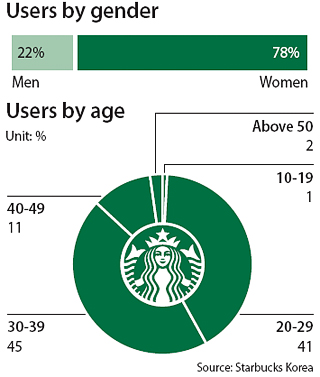 The number of orders made through Starbucks Korea’s mobile app has surpassed 10 million.

The Korean operation of the American coffeehouse chain launched the Siren Order function in May 2014 to allow customers to order and pay for food and beverages through their phone.

The app has an estimated 3.8 million users, with eight out of 10 Siren Order users being female, according to statistics from the company, in line with the relatively higher number of women enrolled in Starbucks’ rewards program, and 86 percent of users are in their 20s and 30s.

“Two and a half years ago, we became the world’s first to launch Siren Order, so its success was not ensured,” a Starbucks Korea spokesman said. “I guess that’s why the 10 million orders record is so encouraging for us.”

The branches at which Siren Order is most used at are near the Gangnam and Hongik University subway stations, COEX Mall in southern Seoul and Times Square in Yeongdeungpo District, western Seoul - all areas frequented by millenials.

While those areas had the highest overall purchases from Siren Order, the proportion of mobile app transactions in comparison to total transactions was largest in office districts like Yeouido in western Seoul, Myeong-dong and Jung District in central Seoul and the Gasan Digital Complex in the southwestern outskirts of the capital.

According to the company, aside from making ordering easier, users also value the app’s personalized features that allow them to bookmark favorite menu items along with preferred personal options such as added syrup or specific type of milk.

The total number of bookmarked items is 2.47 million and has been going up since 2014, when it was a mere 51,000, suggesting that customization is catching on among Korean consumers. Previously, many Koreans were not used to customizing their coffee.

Since its launch, Siren Order has gone through several improvements. When the service first started, customers could only make orders through the Starbucks app when they stepped inside the store. In October 2015, the boundary was extended to 500 meters (0.31 miles) outside the store, and in February this year, the radius was revised to 2 kilometers.

The range of menu items available on Siren Order expanded to food, bottled beverages and coffee beans in August. Prior to that, users could only order coffee drinks.