National Opera’s artistic director not afraid of variety: In upcoming season, company to show diversity of the genre

National Opera’s artistic director not afraid of variety: In upcoming season, company to show diversity of the genre 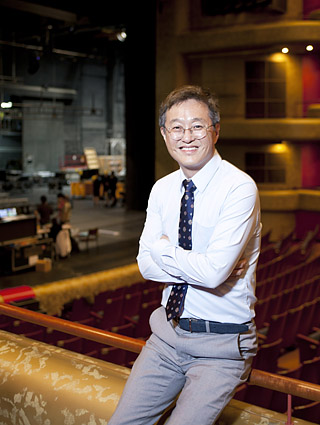 The Korea National Opera usually starts its season off with fairly well-known opera pieces by Puccini or Verdi. But this year, the state-run opera company adopted a “seasonal repertory system” and gallantly went ahead and performed unfamiliar works like “Rusalka” and “Orlando Finto Pazzo.” They are written by famous composers like Antonin Dvorak and Antonio Vivaldi, but most Koreans weren’t even aware that their works included opera. Especially in Korea, where opera is regarded as a difficult and tedious genre of performing arts, it was an unusual move by the Korea National Opera to stage performances that don’t even get performed often in Europe, the birthplace of the art.

But when these unfamiliar pieces were staged by the Korea National Opera, audiences said they received a refreshing jolt. “Rusalka” was based on a familiar fairy tale of a mermaid with beautiful arias, while “Orlando Finto Pazzo,” which is based on the epic poem “Orlando Innamorato,” entertained local audiences with its witty storyline.

This brave yet successful move was made by Kim Hak-min, 54, the new artistic director of the opera who was appointed last July. Some criticized the performances’ level of completion by the Korea National Opera, but overall it received credit for going a step forward by bringing experimental works with popular appeal to the country.

This year’s 2016-17 seasonal repertoire begins with “Tosca,” which kicks off Thursday and runs until Sunday at the Seoul Arts Center. Prior to its kick off, the JoongAng Sunday, an affiliate of the Korea JoongAng Daily, visited Kim’s office for an interview. Kim was sitting at his desk, reading a research paper on the Russian opera “Boris Godunov,” while watching a DVD of the performance on his laptop.

“We are going to introduce this opera for the first time in Korea in April next year,” said Kim. “It feels like the exam is tomorrow but we are not prepared enough for it. Our staff members at the Korea National Opera have been so busy for the past year trying to plan the year long schedule with the launch of the new seasonal repertory system. We are determined to come in even on weekends to be fully prepared.”

Kim joined the Korea National Opera amidst turbulence in the company regarding the appointment of a new artistic director. The post had been vacant for four months before Kim’s appointment as soprano Han Ye-jin, who was named the head by the Ministry of Culture, Sports and Tourism, abruptly stepped down only three weeks after her appointment. Han had been under fire by a group of singers in the country’s opera circles for being unqualified. Before Han was appointed, the artistic director position was vacant for about 10 months.

As soon as Kim joined the Korea National Opera he focused on establishing a sustainable system, rather than looking for instant and visible results like increasing the audience numbers. Kim stressed the importance of drawing up a basic framework for the administrative works such as keeping a database of duty manuals and so on.

He also sought small changes in its production system. Before Kim took over, the Korea National Opera had been entrusting the whole production to a foreign team. But Kim’s idea was to form a firm bilateral collaboration system for all the opera works they stage. Therefore, for the “Orlando Finto Pazzo,” performed in May, Kim, as an artistic director, communicated actively with a foreign director and rather than depending on the foreign director to bring in teams for staging and lighting, Kim brought in local teams instead.

“From the start, I believed such firm networking with foreign teams is important,” said Kim. “We were able to bring out the best by allowing local and foreign staff members to work closely together. From the color themes of the costumes to what kind of fabrics to use, we discussed it together and made agreements. I hope this becomes the Korea National Opera’s identity.”

Kim flatly denied criticisms insisting that he is running the company according to his personal tastes after he picked the unfamiliar “Rusalka” and directed it himself.

“Development takes place when we change, and change follows risk,” Kim said. “For the development of the Korea National Opera, I was determined to listen to any criticisms. But that doesn’t mean I only prefer unfamiliar pieces. We staged famous pieces by Verdi and Puccini as well, especially in rural areas where opera itself is unfamiliar. Some said I’m acting superior for staging difficult and unknown pieces but that’s not the truth.”

Since his appointment, Kim has adopted an approach that is designed to equally include popular works like Verdi and Puccini’s alongside artistically outstanding works that may be somewhat difficult and operas that have the potential to become as popular as the classics.

For this year’s seasonal repertory, Kim followed this idea and picked “Tosca” as a starter, followed by German opera “Lohengrin” by Wilhelm Richard Wagner and “Romeo and Juliet.”

The company will also perform Ruggero Leoncavallo’s “Pagliacci,” and Puccini’s “Il trittico,” which belong to the third and the first categories. Regarding Modest Mussorgsky’s “Boris Godunov,” that’s also included in the 2016-17 season, Kim said he’s not sure if it belongs to the second or the third category, but believes “it’s the most artistically beautiful work of Russia.”

“Some asked me why not go with Tchaikovsky to show great Russian opera, but Mussorgsky is the most prominent figure of Russian nationalism. From the perspective of musical history, it’s best to introduce Russian opera with nationalistic ones,” he said. “Tchaikovsky’s ‘Evgenii Onegin’ is of course the most popular but it’s not very ‘Russian.’”

The biggest change that the Korea National Opera has adopted is the seasonal repertory system, which is the “global standard,” said Kim. By starting a year’s season in September and continuing until June of the next year, Kim says it allows opera companies to prepare a year’s repertory in advance.

“The key is how systematically we take this system and I hope we do it right.”

The season’s starter “Tosca” is a popular one that even appeals to audiences in rural areas. But the Korea National Opera hasn’t performed it in 12 years.

“Since the Korea National Opera is showing this popular opera for the first time in a long time, we tried to do it differently,” said Kim. “Critics usually reproach opera companies for ‘slavish repetition’ and living off the same old popular works that sell well. So, I want to prove that we, the Korea National Opera, can do it differently for audiences today. In short, it’s the contemporary version of ‘Tosca.’”

Kim, who studied musical theory and Western music, has directed numerous operas but he’s also known for bringing the musical “The Phantom of the Opera” to Korea.

“Really great opera is a lot more entertaining than a musical,” he said. “People find opera difficult because they haven’t seen the great ones yet. Therefore, I believe we have to work harder.”

“I think the best way to describe opera is that it’s ‘easy but profound,” Kim added. “The story has to be easy so that audiences focus on the music. But at the same time, it has to include deep connotations. That’s the charm of an opera.”