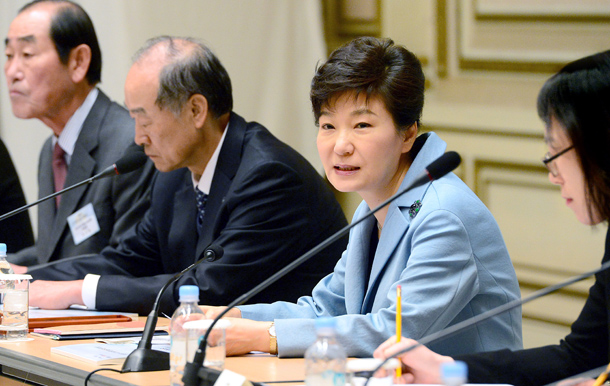 President Park Geun-hye presides over a meeting at the Blue House to innovate engineering schools across the country in 2014. [JOINT PRESS CORPS]

Universities in Korea nowadays remind me of when I studied in Paris more than 30 years ago. At the time, I was a Ph.D. student at Télécom ParisTech. Industry veterans taught most of the classes, and lectures and lab work focused on specific field examples. My adviser had founded a software technology start-up that eventually became a global company, and he set an example for students as a pioneering entrepreneur who sealed a successful M&A deal with a leading American company.

The so-called fourth industrial revolution became a hot subject earlier this year, and the waves are approaching us as a reality. What kind of people do we need to flexibly respond to changes and find new opportunities? Rather than the chasers who can quickly imitate advanced technologies based on diligence, the challengers who can realize creative ideas and create new industries will lead the fourth industrial revolution.

In order to nurture creative talent, academic institutions need to change first. American universities have already contributed to job creation and economic growth through innovation and entrepreneurial activities. In the case of Stanford University, 39,900 of the 140,000 graduates from 1930 to 2010 have started their own businesses, created 5.4 million jobs and have a total annual revenue of $2.7 trillion, equivalent to the seventh-largest GDP in the world, just below the United Kingdom’s $2.8 trillion.

Prestigious Ivy League schools are not bound by academic traditions and are swiftly changing strategies to accommodate technological advances. Princeton and Harvard, which have long focused on the humanities and social sciences, are promoting science-oriented development strategies and fully support students’ entrepreneurial projects.

The Korean government has also promoted the so-called creative economy as a national development strategy to produce new industries and quality jobs by utilizing creative ideas. It is needless to say that colleges and universities are at the center of that strategy. Now more than ever, universities should not be limited to research and academic studies but also enhance innovation and entrepreneurial activities to evolve into a system that creates social and economic value.

At the end of last year, four science institutes including the Korea Advanced Institute of Science and Technology (Kaist) and the government jointly proposed a new vision for universities. Under the new mission to become an “advanced base to create knowledge and new industries that lead the development of the national economy,” they set innovative strategies such as opening start-up training programs, supporting local companies and nurturing the kind of creativity and problem-solving capabilities that companies want.

The government for its part is supporting engineering schools to educate a business-savvy workforce and help commercialize new technologies and knowledge developed at schools.

As a result, visible outcomes have started to show at Kaist. Instructors with field experience teach students, and students spend sleepless nights materializing ideas into business items. Professors, students and companies are working together to find flaws in products and improve them. Lately, many engineering companies have been providing space for start-ups, entrepreneurship classes and mentoring. Various systems and programs such as leaves of absence to work on start-ups, credits for start-ups and degree programs are being offered.

Engineering schools have a leading role in the creative economy. Let’s hope that universities can transform from passive suppliers of workers that companies need into active molders of industry makers and job creators.

American author Cheryl Strayed wrote about how one can get lost but still also find a way. I send my encouragement and cheers to the young people working hard to make their own way and dream of becoming the next Mark Zuckerberg or Steve Jobs.


*The author is the minister of science, ICT and future planning.