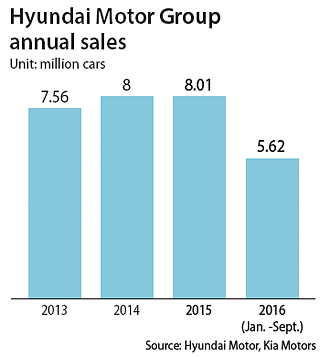 Hyundai Motor Group is in hot water after a double whammy of recalls and labor disputes has compounded unfavorable market conditions, dragging down the performance of the country’s top automaker.

It’s uncertain if the company will even be able to reach its global sales target of 8.13 million cars for this year, considering recent blows to its production capacity and tarnished image.

Sales of Hyundai Motor and Kia Motors, both part of Hyundai Motor Group, had surpassed eight million units for two straight years until last year. This year’s sales, up until last month, have amounted to a mere 5.62 million cars between the two affiliates, about 100,000 short compared to the same time last year.

If the group hopes to even surpass eight million in sales, both automakers will have to sell over 800,000 cars every month for the rest of the year.

The chances seem ever slimmer as the labor union of Hyundai Motor has been staging a record number of strikes in protest over wage negotiations. Ever since talks between labor and management began in July, the union went on a total 24 rounds of walkouts, incurring delays and halting production of at least 142,000 cars. The company estimates losses at 3.1 trillion won ($2.76 billion).

The weather has not been favorable to Hyundai, either. Two out of five plants in the automaker’s Ulsan factory complex, responsible for 44 percent of the company’s global production, suspended operations last Wednesday after Typhoon Chaba caused severe flooding and damage.

While labor strikes and the weather may be considered inevitable factors, the company’s recent recall issues are a different beast.

Toward the end of September, an engineer from Hyundai Motor leaked to various media outlets that the automaker in the United States last year had recalled 470,000 Sonata vehicles manufactured between 2011 and 2012 for their defective Theta II engine, but none of the models using the same engine were recalled in Korea.

The U.S. District Court in the Northern District of California then revealed on Sept. 28 that Hyundai Motor had settled a class-action lawsuit over the Sonata’s defective Theta II engine on 885,000 affected vehicles manufactured between 2011 and 2014.

Hyundai Motor proposed adding 2,000 miles to the 10,000-mile warranty over 10 years on all affected cars, while 470,000 vehicles produced in 2011 and 2012 would be recalled, and models produced in 2013 and 2014 would be given free repairs upon request. As none of the same compensation offers were given to Korean consumers, controversy arose over discrimination between local and overseas markets.

The automaker also faces a lawsuit from the country’s minister of land, infrastructure and transport, Kang Ho-in, for allegedly concealing and delaying a report to the government about air bag defects in 66 Santa Fes produced and sold last June. The ministry says Hyundai Motor delayed telling the government for over a year. Prosecutors began their own investigation on Monday into the automaker on the charges.

A Hyundai Motor spokesperson chalked the delay up to an “administrative error” by a person in charge of communicating the defect with the ministry and said the automaker had no intention of hiding the issue from consumers or the government.

Amid its troubles, Hyundai Motor sank from third to fifth in market capitalization in the Korean stock market on Friday.