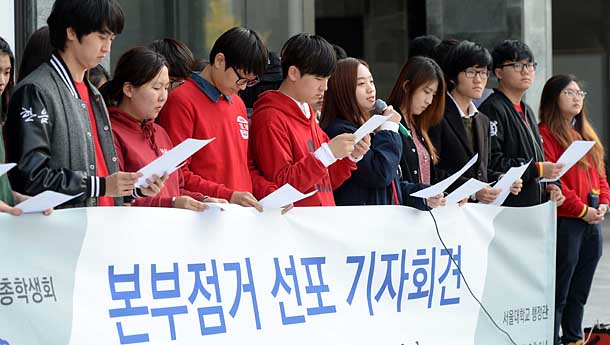 Student council members at Seoul National University in Gwanak District, southwestern Seoul, urge the school to scrap its agreement with the Siheung city government to build a satellite campus there. [NEWSIS]

An angry crowd of students at the prestigious Seoul National University (SNU) in Gwanak District, southwestern Seoul, staged a sit-in Monday night to protest the school’s agreement with the Siheung city government to build a satellite campus there.

The student council said around 1,000 students took part in the late-night demonstration after 1,980 people gathered in front of the central library for an open discussion on the issue. In a vote, 1,483 said they opposed a second campus in Siheung, Gyeonggi, around 18 miles southwest of Seoul, while 1,097 approved the decision to stage a sit-in at the building that houses the president’s office.

The sit-in entered its second day Tuesday and was joined by roughly 100 students.

During a press conference held on campus Tuesday, Kim Bo-mi, the student president, said the protest will last until the school scraps its deal with Siheung. The so-called enforcement agreement, Kim said, signed on Aug. 22, was a clear violation of an earlier promise by the school that it would negotiate each step of the plan to build a second campus with the student body.

According to Kim, the student council was informed about the agreement three minutes before it was officially signed off.

The school’s plan to build a satellite campus in Siheung has been around since 2007, but largely veiled for years due to fear that students wouldn’t want to be forced to spend their campus life outside the capital.

Local media began reporting on the issue in 2013, to which the student president and vice student president responded by shaving their heads in a show of resistance. The school then promised to form what it called a “communication council,” where students would be invited to freely express their opinions on the plan.

The last council meeting, however, was held over a year ago.

In the enforcement agreement signed between SNU and the Siheung government, both sides reportedly agreed to build an “eco-friendly campus” as well as a “global research complex,” terms that the student council fears are so “vague” that the school might be trying to hide what it promised not to push forward.

“At this point,” said Kim, the student president, “it’s hard to believe that the school will keep its promise not to build a residential college on the new campus, or not to transfer any colleges.”

In a residential college, every student is required to live on campus in a dormitory.

Kim Sang-yeon, who heads a group of SNU students urging the school to scrap its deal with Siheung, said the clause regarding the construction of a global research complex seemed to him to suggest that the school was trying to attract investment from private companies.

The end result of that, he continued, would be SNU being a “subordinate” to outside businesses.

Oh Heon-seok, deputy head of SNU’s Office of Planning and Coordination, said the contract with Siheung was no more than a mutual understanding to build a campus there, brushing off accusations that the school was ditching students’ opinions.