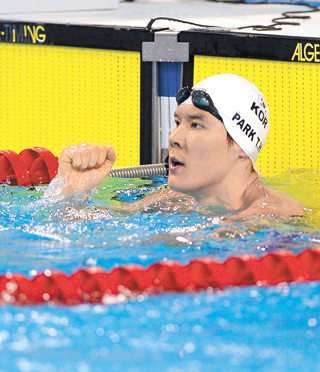 Park Tae-hwan raises his fist after finishing first in the men’s 100-meter freestyle on Monday in a domestic meet. He also placed first in the 400-meter on Tuesday. [NEWSIS]

Although he came home empty-handed from the Rio Olympics, Korean swimmer Park Tae-hwan has proven once again that he is virtually unmatched in domestic competition as he took two gold medals from this year’s Korean National Sports Festival. And his numbers bode well as he looks ahead to the next Summer Games in Tokyo in 2020.

During the 400-meter freestyle final on Tuesday in Asan, Park finished with a record of 3 minutes and 43.68 seconds to climb atop of the podium, topping the Korean National Sports Festival record which he set in 2013.

The gold from Tuesday was the second of the medals he earned from this year’s national sports competition. The previous day, Park claimed first place in the men’s 200-meter freestyle with a time of 1:45.01, a competition record.

His time from the 200-meter freestyle would’ve earned him a silver from the Rio Games and his time in the 400-meter would’ve ranked him fourth.

After the Games, skeptics said the swimmer’s career reached its end.

One of the main reasons behind the poor meet was conjectured to be a lack of proper preparation due to the commotions that took place in the lead-up to the Olympics. Park served an 18-month suspension by the International Swimming Federation (FINA) for drug abuse, which was lifted this March. During his suspension, he was unable to obtain any proper training since he was also banned from practicing at pools sanctioned by FINA.

His distress didn’t end there. After the ban expired, he was mired in a legal dispute with the Korean Olympic Committee (KOC) regarding its policy on banning athletes from the team after bans by an international body is lifted. The KOC decided to allow Park to compete on behalf of Korea only after an ugly legal fight that even involved an international arbitration body.

But now that he recorded times that put him on the map once more, the second wind of his career may be in his reach. “Once I know for sure that I want to compete in Tokyo, I will prepare for the Olympics with everything I have, unlike this time,” said Park after he was eliminated from the men’s 100-meter freestyle event in Rio.