Getting to first-name basis

Getting to first-name basis 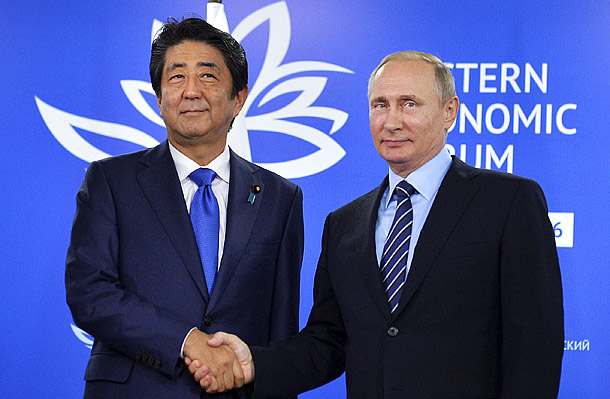 Calling each other by first name is a sign of closeness. Earlier last month, Japanese Prime Minister Shinzo Abe and Russian President Vladimir Putin did just that when they met at the Eastern Economic Forum in Vladivostok. During the meeting, Abe suddenly called Putin “Vladimir,” and Putin responded with “Shinzo.” The two have already had 14 summit meetings. It is no coincidence that they have become close friends even after Japan joined Western countries in sanctioning Russia after the Ukraine crisis.

In the early 20th century, Japan crushed Russia’s Baltic fleet and took over the Korean Empire. The Soviet Union retaliated by breaking the Soviet-Japanese Neutrality Pact and participated in World War II. Who would have known that the two powers with a grudge would end up so close? Putin wants to break his country’s isolation, and Abe wants to end the Northern Territories negotiations. The cozy relationship is an outcome of their shared interests.

Recently, Russia proposed Japan extend the Trans-Siberian Railway to Hokkaido. If the project is completed, residents of the Japanese island will be able to enjoy the snowy scenery of the continent and travel to Europe via Moscow. When Abe met Putin in Sochi, Russia, in May, he proposed an eight-point economic cooperation plan that costs 1 trillion yen ($9.7 billion). Abe created a ministerial post to be in charge of the project, so the plan is likely to be seriously reviewed.

Japan’s courting of Putin has been persistent. It was former Prime Minister Yoshiro Mori who initiated improvements with Russia. When he became prime minister in 2000, he chose Russia as the first country to visit and stopped by his father’s grave in Siberia.

Mori’s father fought in World War II and became a prisoner, but afterward, he returned to Japan and founded the Japan-USSR Friendship Society. He dictated in his will that half of his remains be buried in Russia. The prime minister’s visit was a strictly calculated move, and naturally, Putin accompanied him.

Putin discussed the story at the recent Eastern Economic Forum and emphasized that the past should not hinder progress. Mori dearly calls Putin Volodya, and Putin calls him Yoshi.

Abe and Putin will meet in Peru in November and later have their 16th summit meeting at a traditional ryokan inn in Yamaguchi Prefecture, Abe’s political base, to make a critical move toward a peace treaty.

How can Japan engage in contradictory diplomacy by helping Russia come out of isolation while imposing sanctions on Russia? It is a bold move to protect its national interests. In March 2014, right after Russia annexed Crimea, Japan sent Vice Foreign Minister Akitaka Saiki to Washington to meet with U.S. Deputy Secretary of State Tony Blinken, then the deputy national security adviser.

Saiki conveyed to Blinken that Tokyo would cooperate with the United States on Crimea issues but would pursue its relations with Russia separately. The following month, Abe persuaded President Barack Obama that improvement in Russia-Japan relations would benefit security in Northeast Asia.

It was a move that undermined the U.S.-Europe-Japan alliance against Russia. In fact, 75 years ago, Japan approached the Soviet Union and signed the Soviet-Japanese Neutrality Pact, only to strike Pearl Harbor eight months later. But the catch is that the United States cannot part with Japan, which is helping check China. Abe used it as leverage in his foreign affairs situation.

The honeymoon between Japan and Russia shows that the curse of the Cold War cannot restrict today’s peace. South Korea needs to change its Cold War mind-set as Russia is courting the country aggressively.

If Park Geun-hye’s Eurasia Initiative can be integrated with Russia’s New Far East policy, China’s One Belt, One Road initiative and Japan’s connection to the continent — and if the polar route is developed — the global economy will have new vitality. While North Korea’s nuclear provocations are the weak link in the Eurasia network, Seoul needs to initiate realistic and creative international cooperation to resolve the situation.

The United States is even more aggressive in seeking a fundamental resolution on the nuclear threat than South Korea is. American experts began to discuss two extremely contradictory solutions — dialogue and pre-emptive strike — due to the possibility of a North Korean nuclear attack on the continental United States. Supporters of negotiations have proposed as a first step a new plan to adjust the scale and content of South Korean-U.S. military exercises depending on the progress in freezing North Korea’s nuclear programs.

When all other parties are actively seeking realistic cooperation, South Korea cannot remain asleep. As we join international sanctions on North Korea, we need to prepare peaceful solutions as well. Before it is too late, we need to use economic policy to prevent a war and protect peace.


*The author is chief editorial writer of the JoongAng Ilbo.