Surrealist sounds and storytelling fuel new music : With a cast of characters, Hitchhiker plans to bring unique world to life

Surrealist sounds and storytelling fuel new music : With a cast of characters, Hitchhiker plans to bring unique world to life 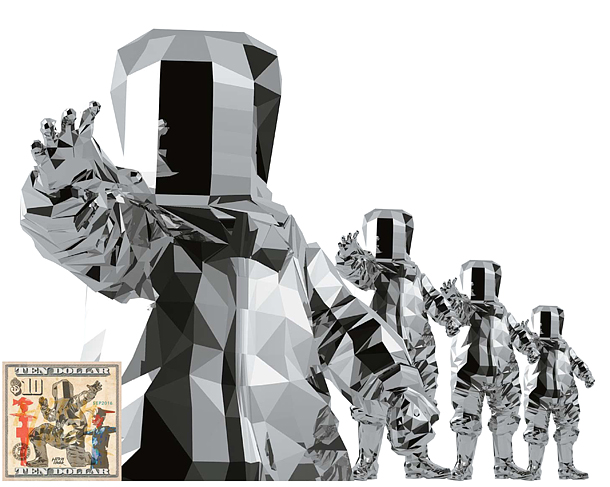 If Psy shook the world with the upbeat rhythm and unique dance in “Gangnam Style,” Hitchhiker, or Choi Jin-woo, 45, is showing potential to becoming the next big hit maker with his eccentric style of music. With his most recent song “$10,” which was released last month, Hitchhiker is once again exciting music fans.

Hitchhiker is an electronic musician who released the song “Eleven” in 2014. Notable for his unique appearance, the artist disguised himself in a shiny silver space suit while he was dancing and DJing. He made his identity highly mysterious, taking nearly a month to be interviewed after his debut. When JoongAng Ilbo reporters first contacted him, all that they received back from Choi was a short reply reading, “I am an organism from outer space. Hence, it is impossible for me to grant interviews.”

When the reporters finally managed to get in proper contact with Choi through a phone interview, he said, “I wanted to try something that no one else had done before, and thus decided to perform as a character-artist. 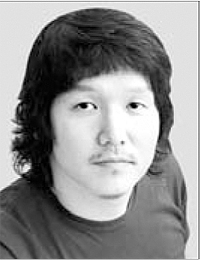 Although “Eleven” marked his first appearance in a space suit, it is not Choi’s first musical achievement. He made his debut as a singer in 1996, was a member of the rock band Rollercoaster in 1999, and produced several hits, such as Brown Eyed Girls’ “Abracadabra” (2009).

According to Choi, Hitchhiker is not just a stage name, but a unique character. It even has a background behind its birth, which dates back to the year 1950 when a scientist launched a satellite into space. After a while, the satellite’s artificial intelligence ordered Hitchhiker to go back down to Earth to collect sounds. It is now Hitchhiker’s duty to gather delightful sounds and create music with them to make people happy.

Other characters that appear in Hitchhiker’s music videos also have their own stories. Fish Girl, with a fish on top of her head, has the power to foresee the future, and Ice Cream Man is a level-headed friend. It all seems a bit odd and absurd, but these imaginary characters are creating a great deal of interest.

“I recently met with a famous television producer and discussed making a TV show on Hitchhiker,” said Choi.

Choi is also participating in a project funded by the Korea Creative Content Agency to organize a new performance with his characters and music.

His songs are unique in that there’s not much singing, but just repetitions of sounds. Choi produced “Eleven” by recording his daughter’s voice when she was tapping her mouth, and the basis to “$10” is a man shouting “Ten dollars, five dollars!”

“[When I produced ‘$10,’] I recorded and remade the voices of umbrella sellers in Times Square, New York,” said Choi.

“After the release of ‘Eleven,’ Lee Soo-man, the CEO of SM Entertainment, suggested using funny sounds again for upcoming songs, like dog sounds. This is how I created Hitchhiker’s character that of a ‘sound traveler,’ producing music out of a variety of recorded sounds.”

Choi is famous for being a multi-talented musician, and doing basically all of the work on his own, including songwriting, recording, and even producing music videos. His music videos are as unusual as his music, mostly consisting of his characters dancing in Korean alleyways.

“The backgrounds of my music videos are all places we spend time at in our daily lives,” said Choi. “I wanted to break the stereotype that music videos must be filmed at fancy places.”

Hitchhiker’s appearances in his space suit is also a part of his willingness to think outside the box. Choi’s ultimate goal is to develop Hitchhiker into a musician that transcends external characteristics like race, nationality, age, gender and physical appearance.

“I’m planning to hold a show in the U.S. next year, in which Hitchhiker and my other characters will be performing together.” said Choi. “It’s planned to be a collaborative performance with legendary American jazz musicians.

Business-wise, I would like Hitchhiker and the other characters to grow into the Marvel Comics of Asia. Like superhero movies where a number of characters with different backgrounds come together, I think Hitchhiker and his friends can grow into something like that as well.”