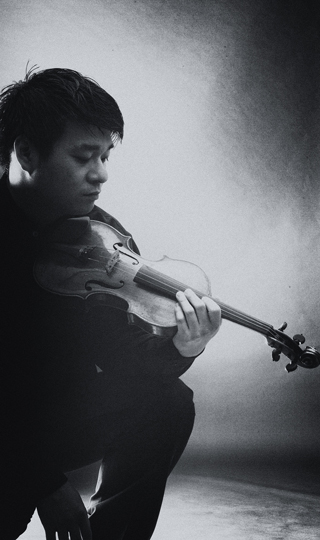 Internationally-renowned violinist Chung Kyung-hwa wrote on Facebook on Wednesday, “I’m overwhelmed with grief by this precipitous death. He was an outstanding violinist and a young man who so loved music.” She continued by saying, “I had so much to talk about and stories to share with you, but I never dreamt that our farewell would come this fast. Hyuk-joo, my heart aches. Rest in peace and I will never forget you.”

Pianist Julius-Jeongwon Kim posted a video clip of a recent performance together saying, “Hyuk-joo, everyone knows what an earnest and genuine musician you were. That innocent and pure personality of yours and the music you left in this world will always be remembered as well. You were always overworked, now, rest in peace.”

Pianist Sunwook Kim also wrote: “He had always been my favorite brother and a colleague. I played Strauss’ violin sonata for the first time with him, as well as Tchaikovsky’s Piano Trio. We traveled to Europe together for the first time for concerts and I loved hearing his life stories. It’s too early for him to leave.”

Soprano Im Seon-ae, who accompanied Kwun on his last concert on Oct. 4 in Daegu, also lamented his death, saying that he’ll “always be remembered whenever I sing the songs we’ve performed together.”

Kwun’s death is drawing sympathy from fellow musicians and the public, as he was only 31 years old, yet was said to be under an immense amount of stress and was fatigued all the time.

Kwun, who was often referred to as a musical genius in Korea, was on his way back to his hotel in Busan after having “a small amount of refined rice wine with his friends who reside there,” according to the Kumho Asiana Cultural Foundation - Kwun’s sponsor and concert organizer. Kwun went to Busan from Seoul on Tuesday for a concert to be held in Busan on Wednesday evening.

“We’ve been working together with Kwun for the past 20 years and he always thoroughly prepared for his concerts, making sure to adjust his condition the day before his concert,” said a statement from the Kumho Asiana Cultural Foundation, emphasizing that he wasn’t drunk at the time of his death. “Kwun was a strict violinist who came at least 20 minutes early for all his rehearsals.”

The foundation said “it looks like his busy schedule must have been a considerable cost to his health.”

According to the police, the driver of the taxi that Kwun took said that, “the passenger looked like he was asleep but upon arrival at the hotel, he wasn’t breathing.” A hotel staff ran out and conducted CPR, but could not wake him up, said the police. Considering that arrhythmia pills, for an irregular heartbeat, were among Kwun’s possessions, it looks like the musician had heart trouble. Police said Thursday afternoon that the autopsy found that he had died of acute myocardial infarction, commonly known as a heart attack.

Kwun began playing the violin at the age of three, and became the youngest winner of the Korean Eumak Journal Competition at the age of six. A few years later, he went to Russia to study violin and had been recognized as a prodigy. He was also the first Korean to get first place at the Carl Nielsen International Violin Competition in 2004.

Kwun’s funeral is taking place at the Seoul National Universiy Boramae Medical Center in Dongjak District, southern Seoul. His coffin will be carried out on Saturday.