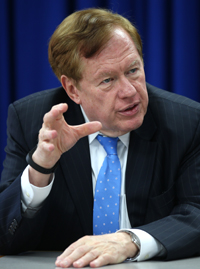 “One of the things we did when we issued our unilateral sanctions based on human rights,” he said, “which included [North Korean leader] Kim Jong-un, was to make sure that before we did it we talked with a number of our allies,” including South Korea, Japan and the European Union.

King, who sat down with the Korea JoongAng Daily and JoongAng Ilbo at the U.S. Embassy’s annex building in central Seoul on Thursday, added, “When we issued our unilateral sanctions, we had strong statements of support from a number of other countries.”

While recognizing some countries may face difficulties in ordering individual sanctions because of domestic legislation, he said, “We would encourage anyone to do that and hope … there will be other countries that may be able to follow us.”

In an unprecedented move, Washington in July sanctioned North Korean leader Kim Jong-un for his role in his country’s human rights abuses. The envoy said, “We’ve done this because we think those who are responsible for those human rights abuses should be held to account.”

King kicked off a four-day trip to Seoul on Monday and had discussions on the issue with officials here, including Lee Jung-hoon, ambassador for North Korean human rights, and took part in the Chaillot Forum, hosted by the Korea Institute for National Unification. He was scheduled to depart for Japan later that day.

A landmark report released in February 2014 by the UN Commission of Inquiry on human rights in North Korea concluded that senior members of North Korea’s military regime, including leader Kim, had committed or overseen a broad range of crimes against humanity. It advised the UN Security Council to bring the issue to the International Criminal Court (ICC).

King admitted it was “unlikely” that the UN Security Council would produce a resolution actually referring Kim Jong-un to the ICC in The Hague. But the Security Council, he said, plans to raise the issue of North Korean human rights issues in its agenda this year, as it has in the past two years.

“The one thing this does is put North Korea in front of the leading security body of the United Nations,” he said. “I was at the last two sessions. Not one country that was a member of the Security Council … defended North Korea.”

He added that Washington is “looking into various ways at how we can increase the flow of information into North Korea,” adding it has “spent considerable amounts of money” on programs such as Voice of America and Radio Free Asia and cooperated with Seoul and other governments to get information into Pyongyang.

King pointed out he started his career in 1970 working for Radio Free Europe, which the United States used to broadcast information into countries like Poland, Hungary, Romania and Bulgaria.

“As we look back at what happened in 1989 and 1990 in Central Europe,” he said, “the availability of information that Radio Free Europe and BBC and other sources provided was extremely important element in terms of creating the conditions that ultimately led to changes that occurred in Central Europe.”

He pointed to a change in China’s strict policy of sending North Korean defectors back to Pyongyang, which goes against the principle of non-refoulement, pointing out, “The Chinese are not playing the role that they did in the past of returning everybody that they captured and making an effort to do that, at least that’s my impression.”

He added, “My sense is if people cross the border and are in the process of going through China to get into Southeast Asia, the Chinese are being less rigid than they used to be in the past.”