2016 WeAJa flea market to be held on Sunday

2016 WeAJa flea market to be held on Sunday 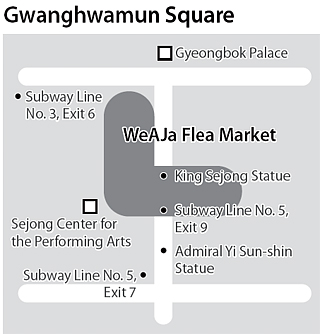 At the event, which draws more than three million people each year, attendees can trade goods, bid for items donated by celebrities and enjoy entertainment.

The country’s largest day-long flea market has raised over 1.3 billion won (about $1 million) in previous years, with all proceeds going to help underprivileged children.

The event in other cities will run 30 minutes longer, until 4 p.m., at Borame Park in Daejeon; at the plaza in front of Dasom Yard in Busan Citizens Park; and at the National Debt Redemption Movement in Daegu.

The Anti-Corruption & Civil Rights Commission, which drafted the antigraft act, confirmed in a statement that running the WeAJa bazaar is legal and neither donors nor buyers will be punished because the event serves the public interest.

Golfer Park In-bee, who won gold in the latest Olympics and is currently ranked 7th on the Rolex Rankings, donated her Odyssey White Hot RX 1 Putter, which she is said to have personally used.

Former president Lee Myung-bak donated a personally calligraphed chengyu, or four-character Chinese idiom, which he proclaimed on New Year’s Day in 2009 and wrote recently. The meaning of the idiom is: “to save the nation and lead it aright.”