Redevelopment feuds spring up over skyline

Redevelopment feuds spring up over skyline 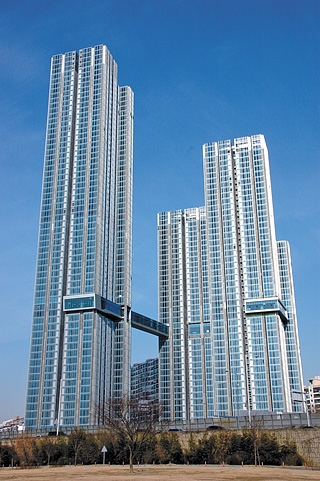 The biggest concern of reconstructed apartments is whether to build a 35-story apartment or a 50-story one. Although there are those who believe taller buildings would attract larger investments, the Seoul government has been pushing for 35-story apartments, which is creating friction with the homeowners’ associations overlooking the projects.

The center of this conflict started with apartments in the neighborhood of Apgujeong in southern Seoul. When the Seoul government announced Oct. 6 the basic development plan of the one of the wealthiest neighborhoods in the country, it said it was limiting the height of the buildings to 35 stories.

It’s not news that the Seoul government has been trying to limit the growth of the city’s skyline. When it announced a development plan along the Han River in 2013, it said it was limiting the maximum height of apartments to 35 stories.

After the Seoul government reaffirmed its stance on the skyline, the value of the apartments in Apgujeong dropped 50 million won.

“There’s a huge disappointment as homeowners that have put up their apartments for sale hoping the price would further go up on growing expectations of redevelopment have canceled their sales,” said a realtor in the neighborhood.

With the announcement of the plan for Apgujeong, neighboring areas are being affected.

“There was a general consensus that the newly reconstructed apartment would be 50 stories high,” said an owner of an apartment at the Eunma complex in Gangnam, southern Seoul. Eunma also hopes to see its long-awaited reconstruction kick off. “However, the project has no other choice but to be dragged around if the apartment height is cut in half.”

Some of the developers of the apartment projects are changing their initial designs.

The Sinbanpo 3 Cha and Banpo Jugong 1 Danji buildings, all in Gangnam were initially planning to reconstruct their buildings to be 45 stories. But recently they’ve changed their plans to build a 30-story structure. Hannam New Town in Yongsan, central Seoul was also planning a 50-story apartment.

Seoul has been steadfast in controlling the skyline, as it sees the Han River view as a public service to Seoul residents.

“The goal is to protect the city’s scenic view while preventing the privatization of [Han River] view,” said Choi Jin-seok, an official in Seoul’s urban planning department.

The Seoul government said that even with a 35-story apartment, there are many design choices. Even housing experts are split.

Raemian Caelitus in Yongsan, central Seoul, which earned construction approval from mayor Oh and was built between 2011 and 2015, is 56 stories. Seoul Forest Trimage in Seongsu-dong is 47 stories.

Lim Hee-jee, a researcher at Seoul Institute, said the Han River view is public property that all Seoulites should be able to enjoy.

“In 2013, where there has been public discussion over the reconstruction apartments in Jamsil [southeastern Seoul] along the Han River, there was an agreement on setting the height of the reconstructed apartment at 35 stories,” Lim said.

Song In-ho, a researcher at the Korea Development Institute, agreed that the government should limit heights.

“The purchase of trying to raise the reconstruction apartments [by the homeowners] is to create more profits by selling the additional apartment units that could be built,” Song said.