Luck-Key’s humor warms the heart: Director focused on the laughs for Korean remake of Japanese film

Luck-Key’s humor warms the heart: Director focused on the laughs for Korean remake of Japanese film 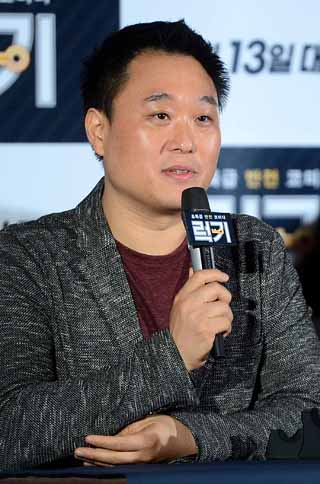 Lee Gye-byeok’s “Luck-Key,” is his first movie that he has directed in 11 years. The filmmaker also helmed “The Beast and the Beauty,” which was released in 2005. [SHOWBOX]

Life after losing your memory completely can be stressful and terrifying. But it can also be an opportunity to restart and to pursue a new dream.

That’s how Hyeong-wook (Yu Hae-jin) feels in the action-comedy “Luck-Key,” after the hit man hits his head and loses his memory at a public bathhouse. After the incident, a poor, unknown actor, Jae-seong (Lee Joon), who is also in the bathhouse, takes advantage of the killer’s memory loss and swaps locker keys with him. Although he loses everything, Hyeong-wook starts to chase a new dream.

The movie, which hit theaters on Thursday, tells the story of Hyeong-wook’s journey of trying to find out who he is after jumping into another person’s life. In the process, the character falls in love with an ambulance worker named Rina (Yoon So-hee) and finds that he wants to become an actor.

Although the film lacks suspense, it is still entertaining with its humor and heart-warming story. Director Lee Gye-byeok sat for an interview with M Magazine, an affiliate of the Korea JoongAng Daily.

Q. “Luck-Key” is your first film after “The Beast and the Beauty,” which was released in 2005. How do you feel?

A. It has already been 11 years [since the last movie]. Although it has been a while since I directed a movie, I never felt I left the movie industry, as I have consistently been working on scripts and have also taught [at Seoul Arts College].

Why did you choose to helm “Luck-Key,” which is a remake of the Japanese film “Key of Life?”

I truly liked filmmaker Kenji Uchida’s “A Stranger of Mine” (2004), so I prepared to direct a remake of one of his films. I wrote a script independently and the film that was made was screened at theaters under the title “Couples” (2011). Later, I heard that Uchida’s film “Key of Life” was a huge hit in Japan. Since I wrote a scenario for “Couples,” I was asked to direct [the remake of “Key of Life”] by a production company. The characteristic of the Japanese director’s movies is that he adds crime scenes in romantic comedy, and I thought such genre would interest Koreans.

“Luck-key,” however, is more focused on comedy compared to the original. Why is that?

Since I have experience directing romantic comedies, I wanted to do something different. That’s why I minimized the romance and focused on Hyeong-wook finding a new life.

Was remaking a successful film a difficult undertaking?

I felt pressured because I had to remake it to suit the style of Korean audiences. So I tried to focus on what made me laugh when I first saw the original movie. I found the scene where the killer slips in the public bathhouse after stepping on soap especially hilarious.

Casting Yu Hae-jin was a great choice. Why did you pick the actor?

While editing the script, the CEO of the production company called me to ask whether Yu would be a good fit for the main character. I completely agreed and said yes right away. To be honest, I tried to cast a handsome actor at first, but once I learned that Yu would play the role, I was able to empathize with the plot much more. Thinking back, it may have been difficult for audience to become immersed into the movie if the main character was too good-looking. Not that Yu is not handsome (laughs).

Your film is very touching and hilarious at the same time. What message do you want to deliver through it?

The new life that Hyeong-wook gets to live is the life that Jae-seong was about to give up. Yu summarized this film with a single sentence: “there is no meaningless life” (laughs). I hope to show a funny yet heart-warming story that the audience can see that everyone’s life experience is important.

You worked as assistant director of Park Chan-wook (The Handmaiden), but most of your films are comedy. Why is that?

I truly enjoy writing comedy. Although comedy is very similar to thrillers in that a character is cornered into a tough situation, it is also different in that the former focuses more on humanity instead of situations. I like comedy that has well-crafted scenes instead of relying on an actor’s well-known image.

Do you have plans for a next project?

Nothing has been confirmed. But as much as I’m aging, I hope that my films become more mature.