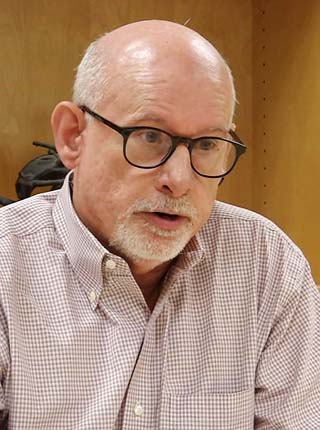 Washington can’t afford to wait for a new U.S. president to shape a fresh policy on Pyongyang, said a North Korea nuclear expert who is the founder of the 38 North website.

“We can’t afford for a new U.S. administration to come into office at the end of January and take months to figure out what to do,” said Joel S. Wit, a senior fellow at the U.S.-Korea Institute at Johns Hopkins University and founder of its website monitoring Pyongyang, 38 North, in an interview with the JoongAng Ilbo in Washington last week.

Since last year, Wit has warned that North Korea’s nuclear and missile programs have accelerated.

“Since then, what we’ve seen is a number of tests that are designed probably as the last step before North Korea starts deploying more nuclear weapons and more missiles,” said Wit. “So it’s very clear to me and others that time is really running out on us if we want to have any chance in stopping this program.”

Similar warnings, Wit pointed out, were made by the Council on Foreign Relations (CFR) last month, which called for the next U.S. president to prioritize North Korea as a critical national security issue.

“There will be more tests beginning in the first half of next year, and we will have to respond in tough ways,” he pointed out. “We need to be thinking about how to move out quickly beginning next year in trying to deal with this problem before it gets out of control.”

Q. How likely is it for North Korea to launch a long-range rocket or conduct a nuclear test?

A. It can happen any time. Certainly at the nuclear test site, I think most of us believe that if they wanted to conduct a test, they could do it very quickly. They’ve prepared for it. At the rocket launch site, and this is talking about the space launch vehicles… there’s a certain amount of warning you’ll get, more than at a nuclear test site.

It may not be on Nov. 8 [to coincide with the U.S. presidential elections]. It may be later in November, early in December, during January, during the [presidential] transition in the United States. It’s possible, but I really have no way of predicting.

The United States emphasizes that China needs to play a larger role.

China has different interests than we do. One of its interests is denuclearization, but it has other interests. As everyone knows, other interests - stability on its border, having North Korea as a buffer against South Korea and the United States - those are much more important interests to China. So why do we think that because we ask it to that China is going to change its national interest to satisfy us? It’s just not going to happen.

So the point here is that we shouldn’t be relying on China, we shouldn’t be subcontracting our policy to China. The United States should be the central player here, and we are the indispensable player in this whole issue: we should be playing that role - and we’re not.

Is there a solution to this?

The first phase, first logical phase, is to freeze North Korea’s nuclear missile tests, and then gradually negotiate the freeze on its whole nuclear program.

Diplomacy is part of an overall policy… and is one of the tools that need to be more seriously pursued.

The recent CFR report called for the next U.S. president to prioritize the North Korea nuclear issue.

If you see the CFR report very closely, you will find buried in there reference to doing something with joint exercises. So these are not my ideas alone, other people have these ideas too, and I think they’re very pragmatic ideas and as long as you go into these policies with your eyes open and understand who you’re dealing with, then maybe we’ll see some progress.

We did it in 1992 with the large scale Team Spirit exercise, and we did get something in return. And it’s quite possible that if our military may look very closely at this they can find a way of scaling back or modifying the exercises, stopping the momentum of North Korea’s nuclear missile program. That creates a space for us to sit down and talk about more permanent measures.

Can we trust North Korea?

None of us believe that North Korea tells the truth all the time, we’re not that stupid or naive. But the point is that if you scale back or modify an exercise, does that mean you can never go back to what it was before? You can always go back and say, “Oh, gee, they’re not living up to their agreement, so we’re going to go back to our exercises the way they were.” So the steps are reversible.

What do you think about some in South Korea calling for nuclear armaments?

It would have an enormously adverse effect on South Korea’s economy, its cooperation in all sorts of areas with other countries.”