Hanjin plans to cut its staff

Hanjin plans to cut its staff 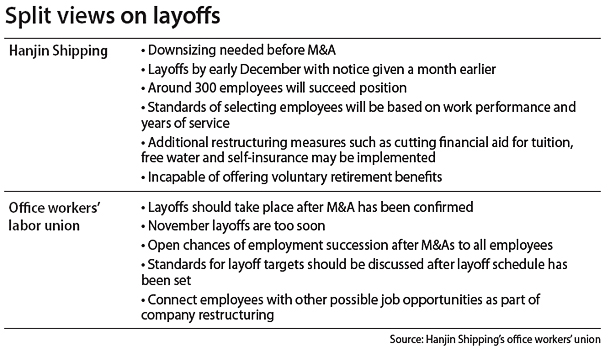 Hanjin Shipping, essentially taking steps toward company liquidation, has proposed to lay off more than half of its white-collar workforce this year.

The shipper’s union representing office workers said Wednesday that it met with the company’s management to discuss further employee downsizing at the headquarters.

“The company delivered its plan to end the labor relationship by December by giving prior notice in November,” said Chung Sung-hwan, head of the workers’ union. “The employees have worked so hard to take care of the logistics disturbance even after the company fell under court receivership, but we are at stake of being thrown away.”

The union was established Oct. 11 to respond to the aftermath of the company falling under court receivership to protect the rights of the remaining workers. The company had 700 white-collar workers during the first half of this year, Hanjin said. Chung said there are currently about 670.

However, as the rest of the workers are planned to be laid off, the labor union urged the layoffs should come after the sales and asked the company provide practical alternatives for the laid-off workers.

The 300 employees will be screened based on work performance, records of rewards and discipline and years of service.

Hanjin has been selling its assets, freezing wages and reducing the number and wages of overseas resident employees as part of its restructuring plan. However, as the situation has worsened since filing for court receivership, the company plans to cut tuition aid, free drinking water in the office and self-insurance, which was previously part of the benefits package.

The court will take letters of intent for the acquisition of Hanjin’s assets through Oct. 28. The main bidding is scheduled for Nov. 7.

The company and the labor union will have another round of meetings today.

“The workers at Hanjin Shipping are one of the best work forces in the industry,” said a person in the shipping industry with knowledge of the matter. “The industry won’t be able to absorb in full the work force leaving Hanjin immediately, but the local industry needs to put in effort to do so.”