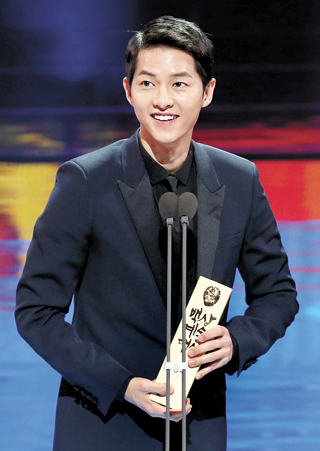 Actor Song Joong-ki made a donation of 20 million won to the social welfare corporation House of Sharing, which is a home for women who were forced to become sex slaves by the Japanese in World War II on Thursday.

The organization said that they received the large donation from Song on Tuesday. The deed was belatedly confirmed by Song’s agency as they were not even aware of his actions.

The actor is likely to have been influenced while filming his upcoming movie “Battleship Island,” which is about 400 forced laborers that attempt to escape Japanese rule during World War II.

Song was previously discovered to have been secretly donating regularly to the Korea Childhood Leukemia Foundation since 2011, and also participated in a yellow ribbon campaign to raise awareness for childhood cancer. The actor also donated his entire commission earned from his narration for 2013 documentary “Tears of the Antarctic” to the foundation, and even donated 100 million won to Unicef for children in Nepal.