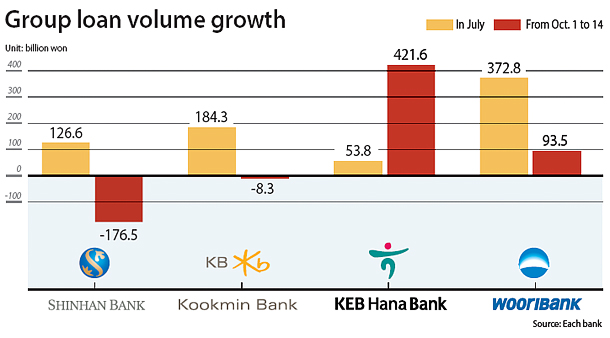 The government’s efforts to rein in surging household debt by clamping down on mortgage lending standards appears to be working, as major commercial banks have seen the number of new loans decrease this month.

The drop is especially apparent for so-called group loans offered to groups of borrowers looking to buy a number of new or redeveloped apartment units. The Financial Services Commission, the nation’s financial regulatory agency, pointed to group loans, which make up almost half of all mortgages, as the main culprit for the country’s ballooning household debt and ordered banks to tighten standards starting this month.

As a result, Shinhan Bank saw its volume of group loans shrink from 18.2 trillion won ($16.1 billion) at the beginning of October to 18 trillion as of Oct. 14, the bank revealed Thursday. The bank’s overall loan volume fell by over 170 billion won in that same period.

KB Kookmin also managed to trim its group loan volume by 8.3 billion won between Oct. 1 and Oct. 14. It is a stark reversal from an upward trend that has been happening since July, when the bank saw group loans jump 184.3 billion won that month.

And while Woori Bank showed an increase of 93.5 billion won from Oct. 1 to Oct. 14, the growth is still modest compared to July, when it posted a 372.8 billion won increase.

“We’ve taken on a conservative approach to group loans since last year,” a Shinhan Bank spokesperson said. “Following the effort, the size of loans decreased, too.”

Acknowledging the potential risk, the source at Shinhan said the bank adopted stricter standards on its own by requiring information on income data from group borrowers last year.

“Banks lend money to groups after reviewing the potential profitability of a property project,” he said. “But we figured that we needed additional requirements and standards since the loan was exempt from established guidelines.”

Starting in November, potential buyers of new apartments or those that are being redeveloped will have to submit income data to a financial institution when applying for a group loan, in accordance with the Financial Services Commission’s measure to tighten standards.