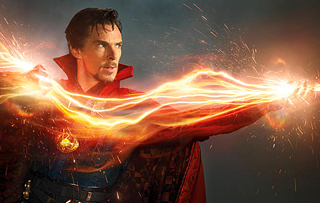 A new hero with unprecedented powers is joining the Marvel universe.

Doctor Strange, played by Benedict Cumberbatch, is a gifted doctor, but after an unforeseen car accident, loses his ability to use his hands. Deeply depressed by the sudden change in his life, Strange tries anything to put his damaged hands back together, but without much success. As his last hope in search of a cure, he sets out for Nepal, where he gets the chance to live a completely different life.

The Ancient One, played by Tilda Swinton, unravels a whole new world of spiritual power in front of Strange, bringing him from a quiet temple to the snowy mountains in less than a minute. She trains him to gain powers to do unimaginable things, and in the process, Strange finds out that there exists a number of dimensions, and that evil villains await on the other side. The villains try to break the barriers between the different dimensions, which would bring a disastrous end to the world.

Will Doctor Strange successfully carry out his duties to gloriously join the Marvel heroes?

Benedict Cumberbatch is a much-loved actor, known by many around the world as Detective Holmes from his role in the BBC crime drama “Sherlock.”

Kubo and the Two Strings (All)

Kubo, played by Art Parkinson, is a naive little boy with special powers to move things with his magical shamisen, a traditional Japanese musical instrument. He lives with his mother, who suffers from memory loss, inside a cave at the end of a cliff. One of Kubo’s joys is entertaining villagers with his story-telling skills, but he is unaware that this would be the beginning of his struggles.

One day, Kubo goes against his promise with his mother to return home before sunset, and gets attacked by the Sisters, evil twins played by Rooney Mara, who were sent by Moon King, played by Ralph Fiennes.

Moon King sends Kubo to a faraway land alone, where he meets up with his new friends Monkey and Beetle, each played by Charlize Theron and Matthew McConaughey. Monkey and Beetle have also suffered under the malice of Moon King, having been put under a curse by him. Together with his friends, Kubo begins a journey to unravel the mystery behind his magical abilities and save his family from danger.

Chosen as the opening film of this year’s Bucheon International Animation Festival, the film is an artistic thrill, full of detailed depictions using various textures and unique formations realized through the form of origami. 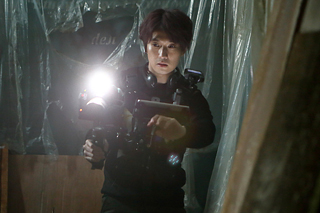 Internet broadcasting jockey Yagwang, played by Ryu Deok-hwan, and producer Park, played by Jo Bok-rae, are always in search of novel ideas for their horror-themed channel. One day, a video clip of a high school girl playing the notorious game “one-man tag” is sent to them, and it’s easy to see that the girl is slowly going mad.

“One-man tag” is a game in which one summons a soul into a stuffed toy and plays tag with it. The girl in the clip, however, goes missing after the video was taken.

Sensing that this could be used for an incredible episode, Yagwang promises his viewers a live broadcast inside the building where the video was taken, the A+ Study Room. The building is now vacant, having gone through numerous tragic incidents after the girl went missing, such as a boy suddenly going blind while studying, or the manager of the facility committing suicide.

Yagwang excitedly heads to the study room, ready to entertain his viewers and hoping to gain a new group of fans. In front of the building, he boldly turns on his video camera, but this is before he realizes what is waiting for him inside the seemingly empty building.

Mary, played by Emma Greenwell, is a woman full of passion for nature and gardening. She loves to feel the wind and water, and dreams of creating a garden not full of artificial decorations, but brimming with wildlife, so that one may feel as though they’re standing in the middle of a forest.

Opportunities do not come easily for Mary, however, who fails to get the chance to show her gardening spirit to the world after starting to work for renowned florist and garden designer Charlotte Heavey.

Mary sets out on a journey to Ethiopia with botanist Christy Collard, played by Tom Hughes, where she becomes inspired by her experiences with the wild life there. Ready to put her inspirations into a piece, Mary enters the Chelsea Flower Show, the most famous flower show in the United Kingdom. 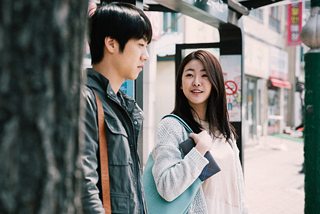 Sometimes, wounds that are too harsh to bear are hard to hide from others. Yeon-woo, played by Shim Hee-seop, may seem like an ordinary man working at a hospital, but he lives each day as though time has halted, with no new friends or special occasions. In his lonesome life, however, a new worker named Won-hee, played by Ko Won-hee, steps in, trying to warm up his heart with considerate words and deeds.

Yeon-woo, however, is too weak to let her in, ignoring her and even sometimes insulting her. With his father ill, his family is not so well off, and Yeon-woo tries to heal himself every night with medications and heavy drinking.

But as the sun thaws even the thickest icicles, Yeon-woo slowly opens up to Won-hee. But for some reason, as Yeon-woo tries to take a step closer to her, Won-hee seems to be walking away. Awestruck by an unexpected reaction, Yeon-woo is eager to find out why Won-hee keeps drawing a line between the two.

Commemorating the 7th anniversary of the late President Roh Moo-hyun’s death, the documentary film shows videos of the late president. President Roh was known to emphasize the importance of breaking down regionalism and authoritarianism, hence often being called “the president most similar to the people.” The film’s title is evocative of Charles Dickens’ novel “A Tale of Two Cities (1859).” If Dickens’ two cities referred to London and Paris, the film’s cities are Busan and Yeosu, in Gyeongsang and Jeolla. The two provinces have been engaged in regional tension for years, and the political differences between the two has always been a hot potato during elections. 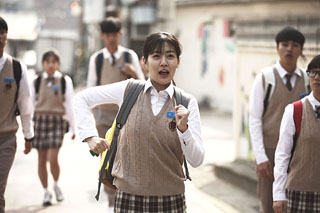 In a world where everybody wants to “do their best” or “be the best,” a bright school girl Lee Man-bok, played by Shim Eun-kyung, tells a heartwarming story in search of her dreams. Man-bok gets carsick in whatever vehicle she rides, making it impossible for her to take any public or private transportation. She walks to and from school for a total of four hours everyday, on the grounds of which her teacher advises her to try out for foot racing. Man-bok has always been an easygoing student, not thinking much about her future nor her studies. But after taking her teacher’s advice, she starts to dream of being good at something for the first time in her life.

But for a girl who’s been carefree all her life, hours of strenuous practice under the sun cannot be easy. Taking her first step towards her dream, Man-bok faces many hardships, from passing out on the track to being harshly scolded by her father.

Man-bok calls for the audience to be alongside her walk towards her dream, during which her bright energy is bound to ease the stress people nowadays are under.

During November, a month filled with college entrance exams and job interviews, the film is expected to free everyone’s mind of the unanswered questions about their future.