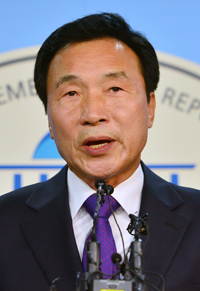 Sohn, a 68-year-old politician, held a press conference at the National Assembly in the afternoon and declared he will give up all his political assets earned by serving as a lawmaker, minister, provincial governor and party chairman. “I will also abandon my membership with the [Minjoo Party of Korea],” he said.

After his humiliating defeat in the legislative by-election in Suwon, Gyeonggi, in July 2014, Sohn moved to a remote village in Gangjin, South Jeolla, and shunned outside contact. But he hinted at a political comeback last month during a lecture in Gwangju.

Sohn is a former political scientist who joined politics in 1992 by becoming a lawmaker of the conservative ruling Democratic Liberal Party, a predecessor of the Saenuri Party. He served as a lawmaker, health minister and Gyeonggi governor with the conservative party. To realize his presidential dream, he left the party in 2007 and joined the main liberal opposition party. In 2007 and 2012, he ran in liberal primaries and was defeated both times.

Promoting a constitutional amendment to start the seventh republic, Sohn said he has no presidential ambition under the current system. “Becoming the president of the sixth republic has no meaning for me,” he said.

Sohn has been considered as a possible “Third Zone,” or Third Way, candidate, after he pushed for a constitutional amendment to introduce a new governing system. The ruling Saenuri Party is currently controlled by loyalists of President Park Geun-hye, while the main opposition Minjoo Party is dominated by supporters of the presidential candidate she defeated, Moon Jae-in. The idea of finding a new political force outside these two groups, often referred to as a Third Way candidate, as well as a constitutional amendment to end the current five-year, single-term presidency, have become political flashpoints in Korea.