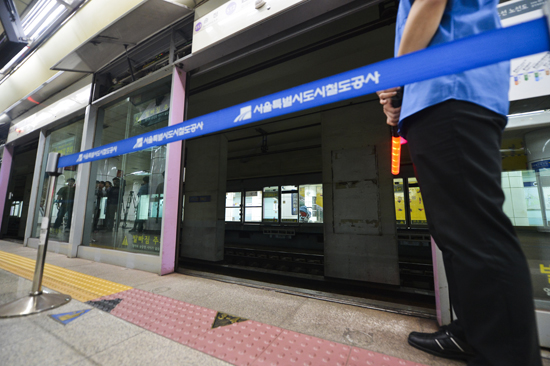 A 36-year-old passenger surnamed Kim was dragged and killed by a departing subway train, after he got trapped between the platform door and the train at Gimpo International Airport Station in Gangseo District, western Seoul, on Wednesday morning. Seoul Metropolitan Rapid Transit (SMRT) said the specifics as to how he got stuck are not yet known.
According to SMRT, an engineer was preparing to start the train and closed all the platform doors when he received an emergency call saying a passenger was trapped inside one of the platform doors. The engineer reportedly reopened the platform doors for roughly 27 seconds, but did not get off to check if there was a problem. He restarted the train without realizing Kim was still between the platform door and subway train.
“CCTV footage showed Kim being pulled from the platform through the screen door’s emergency exit,” said an official from SMRT. “An employee at the station made an emergency call, but Kim wasn’t breathing.”

“It’s a shame that the tragic accident couldn’t have been prevented,” wrote Seoul Mayor Park Won-soon on his private social media account after visiting the scene. “I will do my best to reveal the cause of the accident and never let something like this happen again.”
Meanwhile, labor unions of Seoul Metro, which runs subway line Nos. 1 through 4, announced they will end their strike, starting from Wednesday morning, to ensure public safety.