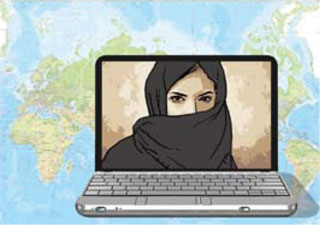 Muslims in the Middle East and Arab world have been perceived with prejudice and misunderstanding. One of the most notable misconceptions is that Islam forces people to convert to the religion, a belief that goes back to the medieval period in Europe. Egypt is a central country in Islamic culture but there still are considerable number of Coptic Christians there. Muslims are often hurt by misconception about oppressed women and wars in the region.

When I entered my Korean language course in Egypt, my Korean teacher told me, “Some Koreans think all Egyptian women cover their faces and bodies with a black covering and do not go out of the houses.” I made up my mind that I will try to advocate accurate Islam and Arabic culture to Koreans.

But Middle Easterners and Arabs also have misconceptions about the Western and Eastern world. The United States and Europe that I saw on television as a kid was an unethical place where children call parents by their names and can get angry at them. People were fighting, and gangs gathered on the streets. I thought they were not safe places. Probably, most Arabs thought that the United States and the Western world were dangerous, with low morals.

Thanks to the development of internet in the 2000s, I met an Egyptian living in the United States online and my perception began to change. He said he worked at a gas station and lived peacefully. I thought my eyes were opening anew. “People are living safely in America!?”

Conversations with my online friend allowed me to give a second look at the United States and the Western world. I realized that there was more than what I saw in movies and news.

I also misunderstood Asia considerably. I used to think all Asians were Chinese. “Japanese people all look the same because atomic bombs were dropped on Japan.” “Asians don’t know how to use a spoon so they use chopsticks instead.” “All Asians can do taekwondo, karate or kung fu.” “Koreans, Chinese and Japanese use the same writing system.”

Misunderstanding happens when there are exchanges and talks. Misconceptions are dangerous as they could evolve into hatred. When we are misunderstood, we need to make efforts to clarify and correct. Those who don’t understand other people’s culture need to seek appropriate knowledge. It applies not only to people but also to countries.


*The author is a TV personality from Egypt who appears on the JTBC talk show “Non-Summit.”