Men raise their voices in Gyeonggi

Men raise their voices in Gyeonggi 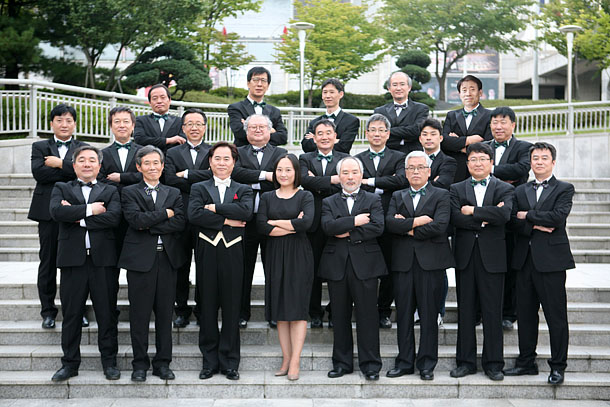 Green_b Men’s Choir is an amateur men’s choir in Gyeonggi. The only female member is a pianist for their upcoming concert. [GREEN_B MEN’S CHOIR]

“I’ve met a lot of people who have passion for singing,” said Chang Jong-won, leader of Green_b Men’s Choir, “so it was easy to recruit members.” Green_b is an amateur choir in Gyeonggi, whose 20 members are employees, professors, doctors, public servants and engineers in their 40s to 60s. Chang, a CPA consultant himself, organized the group in May 2013, and named it Green_b, meaning missing seonbi, or a scholar in Korean.

“I started the group so that people who love music can sing various genres, from classics to pop songs,” said Chang. He had been a member of a church gospel choir and decided to form a male chorus himself in Bundang District, Gyeonggi. As Chang’s group became popular, members from distant areas were recruited as well. Green_b holds a weekly rehearsal on Sundays at Seongnam Arts Center in Bundang to prepare for its monthly charity performances at hospitals and sanitariums, as well as its annual concerts.

The choir is more than a hobby for its members, as they bring their old dreams to each performance. Chang’s childhood dream was to be a vocalist, and he showed talent as a member of KBS Children’s Choir. But instead of pursuing a career in singing, Chang studied trade to fulfill his family’s expectations. “Singing at a choir heals me from everything that troubles me,” said Chang.

Similarly, Lee Jae-don, a member of Green_b and a director at a start-up, sang in a church choir as a high school student. Lee makes it to a practice in Gyeonggi every week, although he works in Daejeon. “Singing in the choir became an energizer for me,” he said.

All members have talent and experience in singing, but it wasn’t easy, even for them, to harmonize. Every voice was unique, and together the choir was dissonant. Allocating appropriate parts to the members was another challenge. But as they practiced, the members came to a realization that listening to others is as important as singing well individually.

“We recorded the practice and listened together afterwards to find out flaws and make improvements as a whole,” Chang recalled. Some members were so devoted they signed up for private vocal lessons and reduced their alcohol consumption. In 2014, Kim Seung-yu joined the choir as a conductor. “[The choir] is also an attempt for its members to give up self-interests to make a harmony,” he said. Their continued efforts paid off, as Green_b received several awards in Gyeonggi last year.

Green_b’s third annual concert will be held Oct. 23, at Seongnam Arts Center for 800 invited local residents and the underprivileged. Green_b will sing folk songs from Russia, Germany and Korea. “Our dream one day,” said Chang, “is to continue singing when all of us are gray-haired, together making a ‘silver choir.’”